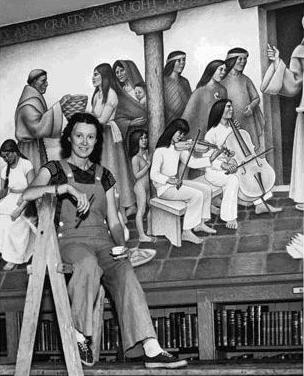 The first, entitled “Spaniards (1776-1848),”  and the third, entitled “Days of First Railroad (1878),” are displayed prominently in that same building, which is now our Tracy Historical Museum.

Unfortunately, the whereabouts of the second mural — “Overland Pioneers,” depicting a family traveling by ox-drawn covered wagon — is unknown. 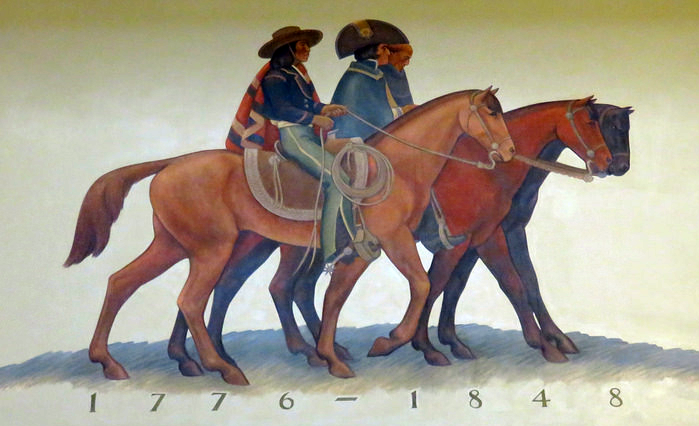 Detail from “Spaniards” on display at the Tracy Historical Museum

“Days of First Railroad” bears the date of 1878, purported to be the year that the Central Pacific Railroad consolidated its operations from Lathrop, Bantas, Ellis, and Midway at the spot originally known as Tracy Junction.

The locomotive represented in the mural is the fanciful “S.P.R.R. 42,” a brightly-painted 4-4-0 steamer in Southern Pacific Railroad livery that we have yet to find evidence of having existed. 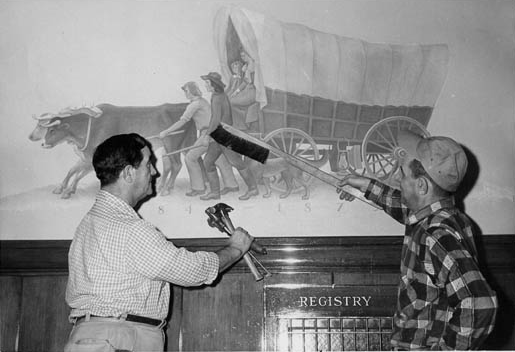 “Overland Pioneers” being readied for display at the Tracy Post Office

Miss Hamlin originally attended the California School of Fine Arts in San Francisco, then matriculated to the Teachers College at Columbia University in Manhattan. Hearing that government-subsidized work for artists was available in San Francisco, Miss Hamlin learned to drive and migrated back west during the height of the Great Depression to join two dozen other artists in the mural project at Coit Tower.

Putting down stakes in San Francisco, she accepted a prized commission to paint the murals at the city’s Mission High School, attracting the assistance of the noted artist Maynard Dixon, who at the time was married to the eminent photographer Dorothea Lange.

(Miss Lange also spent a substantial amount of time in Tracy and its environs during this era, creating an iconic series of photographs while documenting Depression-era migrants … but that’s a tale for another time.)

From the evidence available, Mr. Dixon’s marriage to Miss Lange disintegrated, and he and Miss Hamlin were married in 1937 and remained together until his death in 1946 at the age of 71.

Miss Hamlin continued a distinguished career as an artist and curator of her husband’s life works, many of which are preserved at the Maynard and Edith Hamlin Dixon House and Studio, their summer home in Mount Carmel, Utah, where they worked and lived during their brief time together.

The couple’s other home and studio, located in Tucson, Ariz., has also been designated for preservation as part of that city’s heritage.

Beyond California, Miss Hamlin worked throughout the southwest, notably in New Mexico and Arizona; she was one of the earliest artists to have discovered the unusual beauty of Taos, N.M., and she created lasting murals for the Arizona Biltmore Hotel dining room in Phoenix; and St. Ambrose Catholic Church and the Old Pueblo Club in Tucson, Arizona.

Miss Hamlin lived out the final years of her life in San Francisco, where she died in 1992.

For more about Edith Ann Hamlin, we invite you to visit: