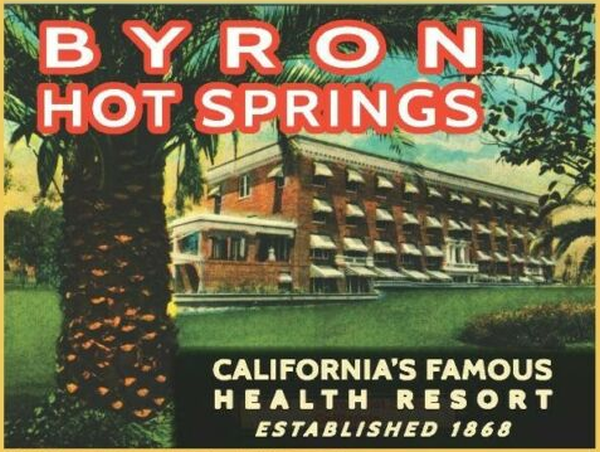 During the early years of the Twentieth Century, the magnificent resort and hotel at Byron Hot Springs was served by a small railroad depot along dusty Byron Road, a short jaunt from the town of Byron (Milepost 66.9) on the Southern Pacific’s Mococo Line (also known as the Martinez Subdivision). Visitors to the resort were transported from the depot to the hotel in horse-drawn carriages. 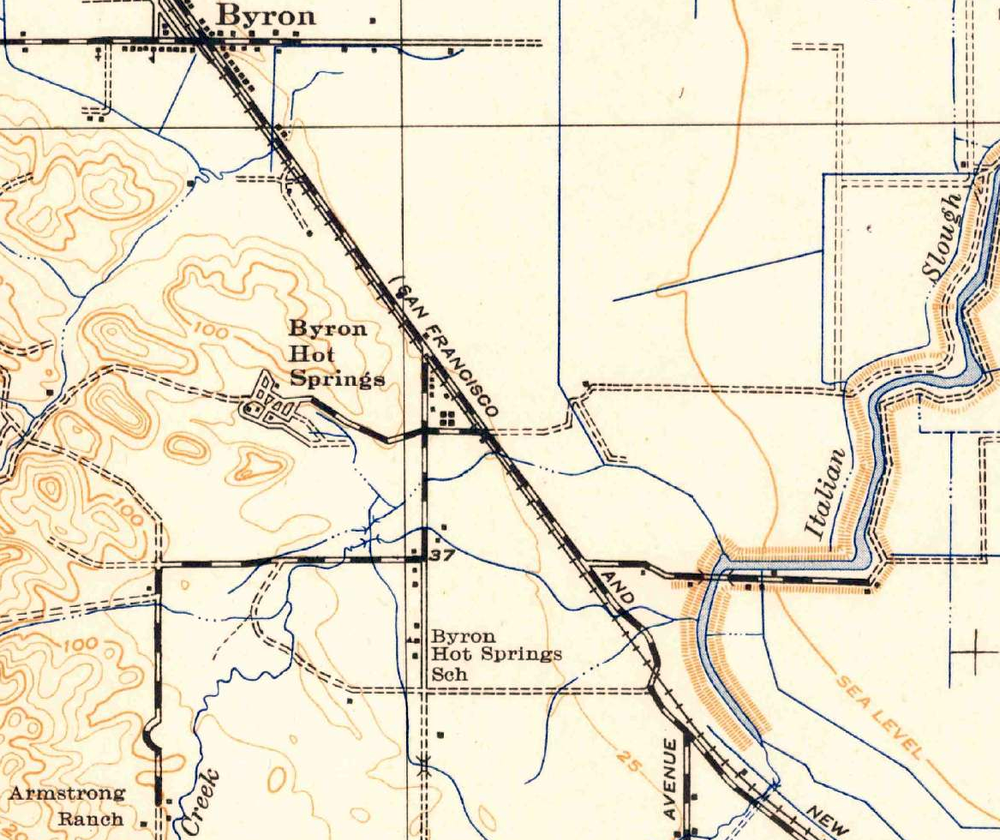 The beautiful hotel building shown in the first three postcard images below was actually the second to be built on the site; this structure, along with its predecessor, burned to the ground and was replaced by a third “fireproof” building that was designed by James Reid, who – with his brother, Merritt – also designed the landmark Fairmont Hotel in San Francisco and the Hotel del Coronado in San Diego. James Reid later married Mae Sadler Mead, widow of Lewis Mead, who had owned and developed the property at Byron Hot Springs.

A pipeline was laid from the San Joaquin River east of the property to pump water to the hotel to aid in fighting any future fires, while drinking water came from the natural springs on the grounds. Gas for heating and lighting the hotel and its adjoining cabins and other buildings came from nearby methane wells.

By March 1944, Byron Hot Springs was listed only as an “additional station” on the SP’s Time Table No. 239, with none of the line’s nine scheduled daily trains – three freight, six passenger – stopping there.

Here is a selection of postcard images of the Byron Hot Springs Hotel, its grounds and facilities, from the first half of the Twentieth Century: 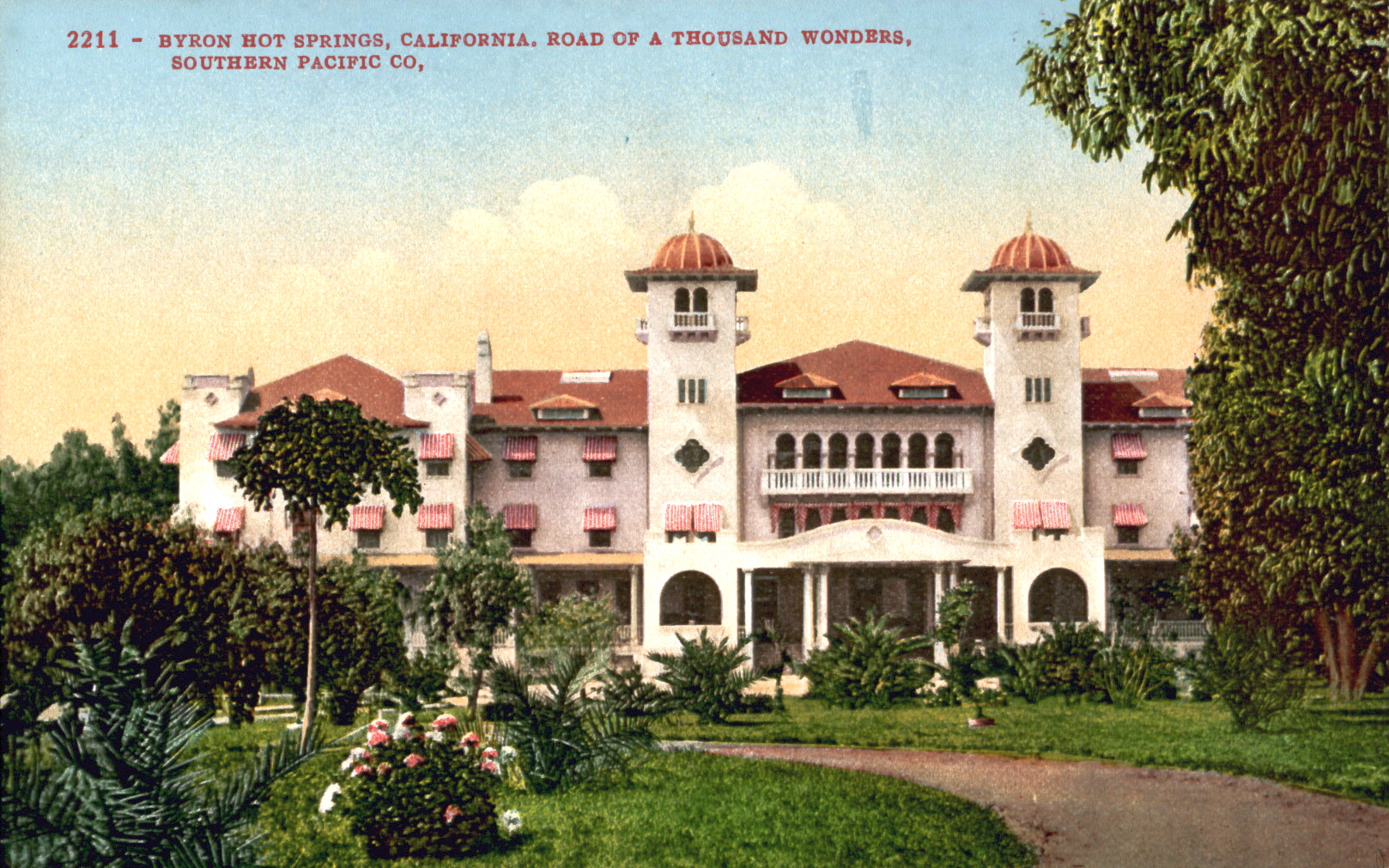 A Southern Pacific Railroad issued postcard featuring the second Byron Hot Springs Hotel, on the “Road of a Thousand Wonders” (Circa 1907) 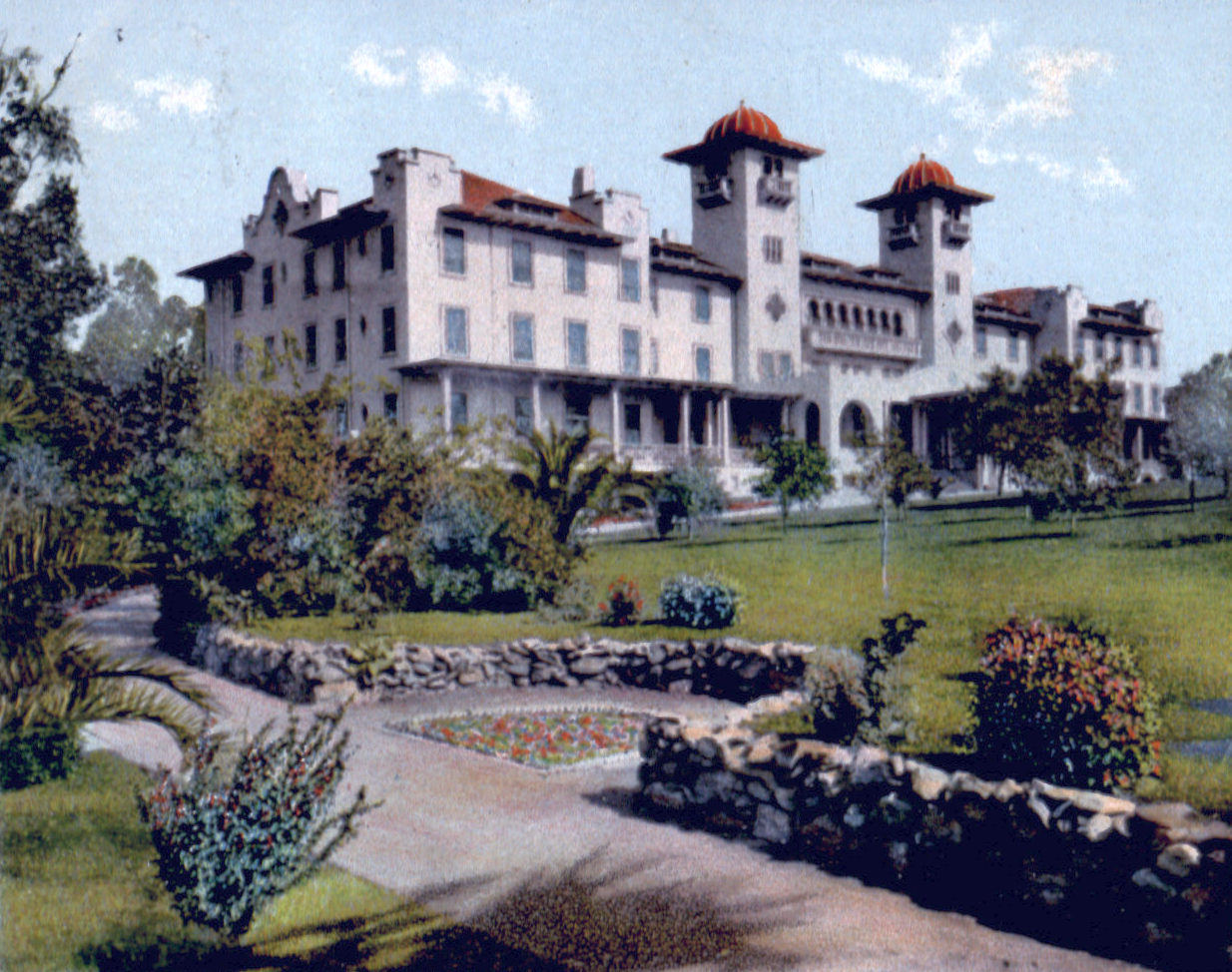 The second version of “America’s Greatest Spa” (circa 1905) about a decade before it burned down. 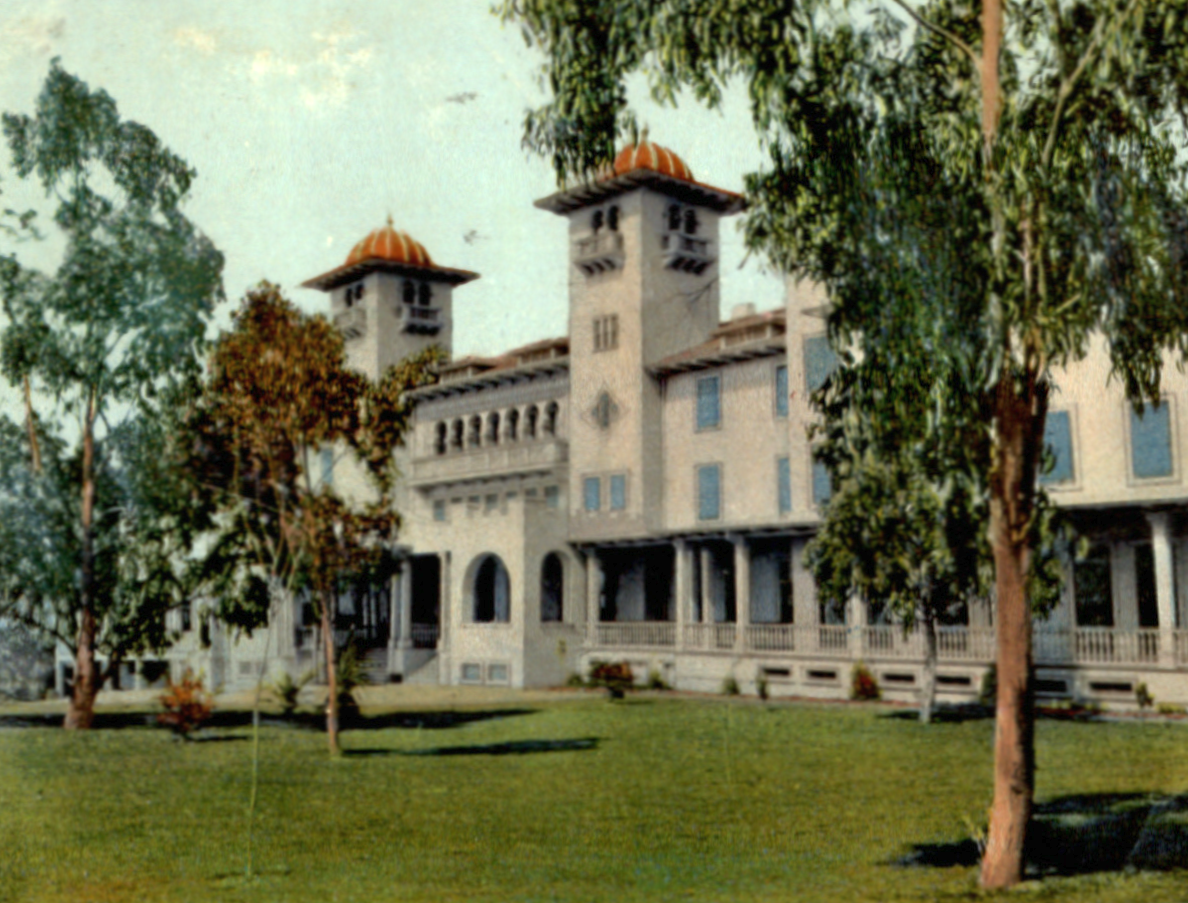 Another view of “America’s Greatest Spa” (circa 1905), showing the second iteration of the hotel before it was destroyed by fire. 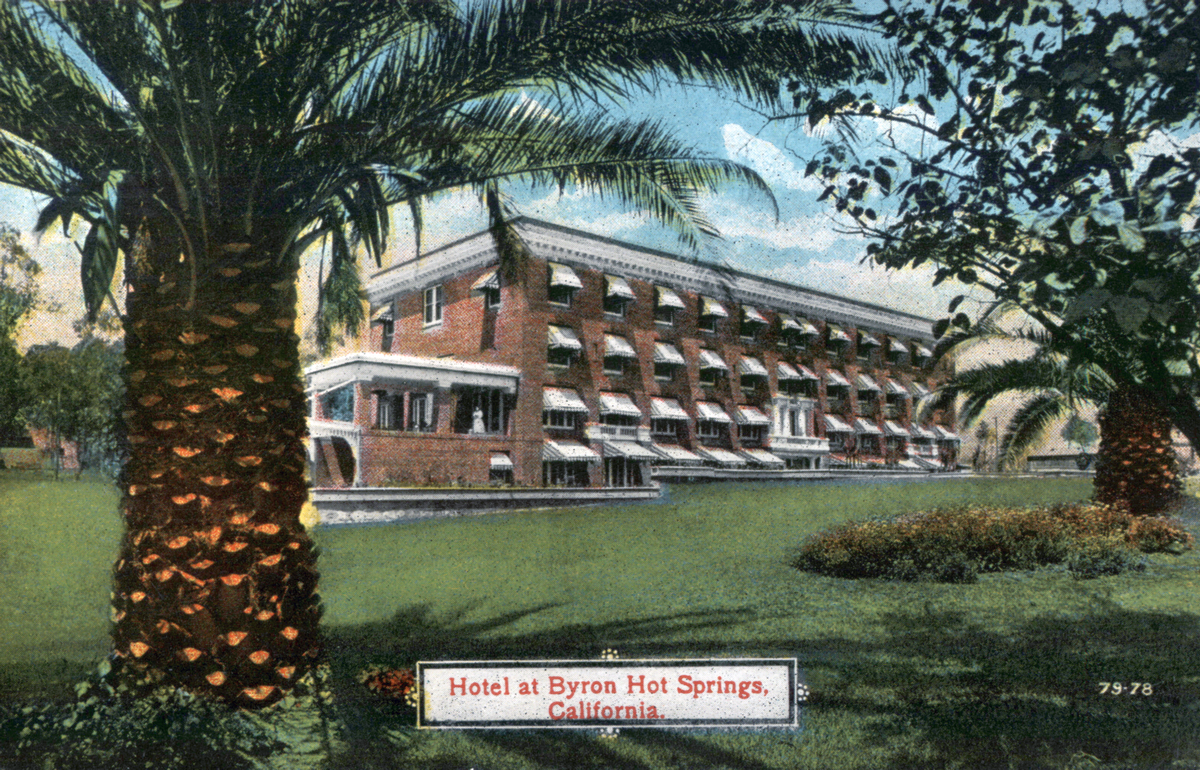 “Hotel at Byron Hot Springs, California.” This is the third of three hotel buildings constructed on the site; the first two were destroyed by fire, while this one remains standing to this day. (Circa 1918) 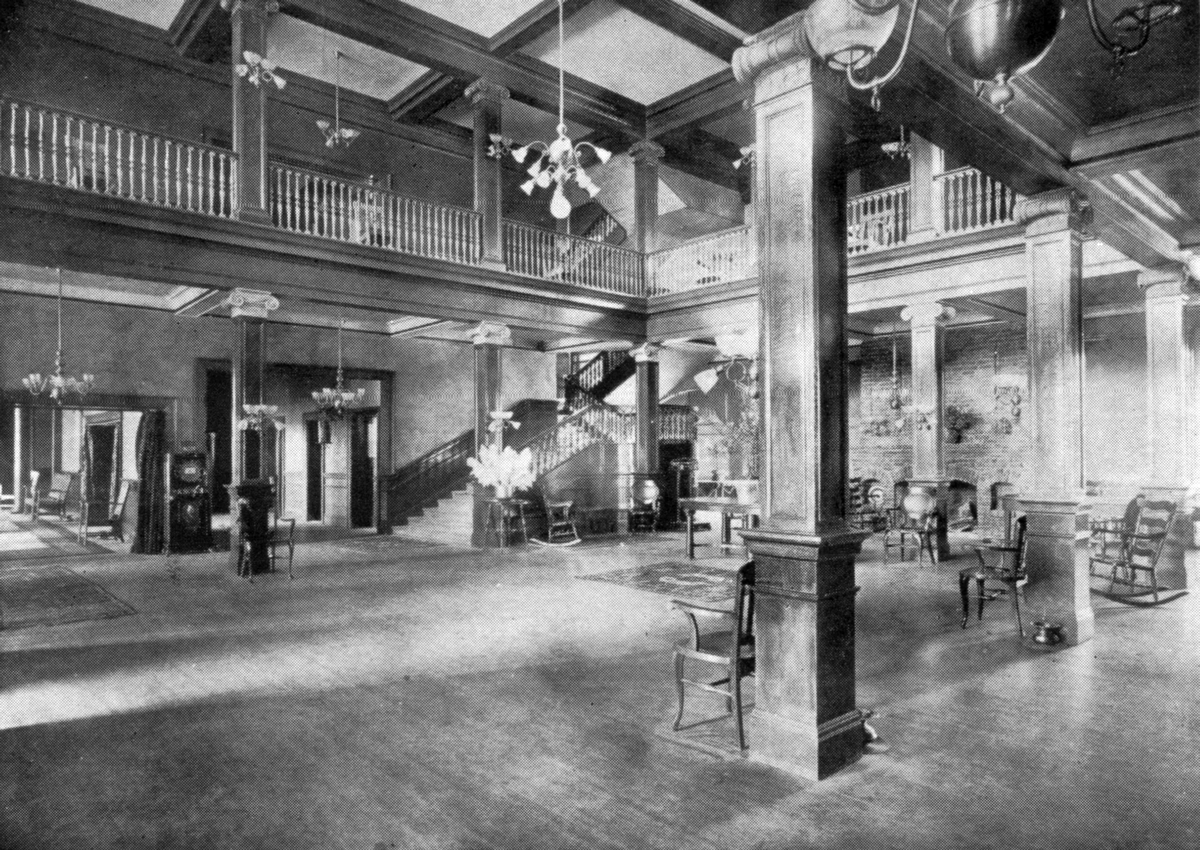 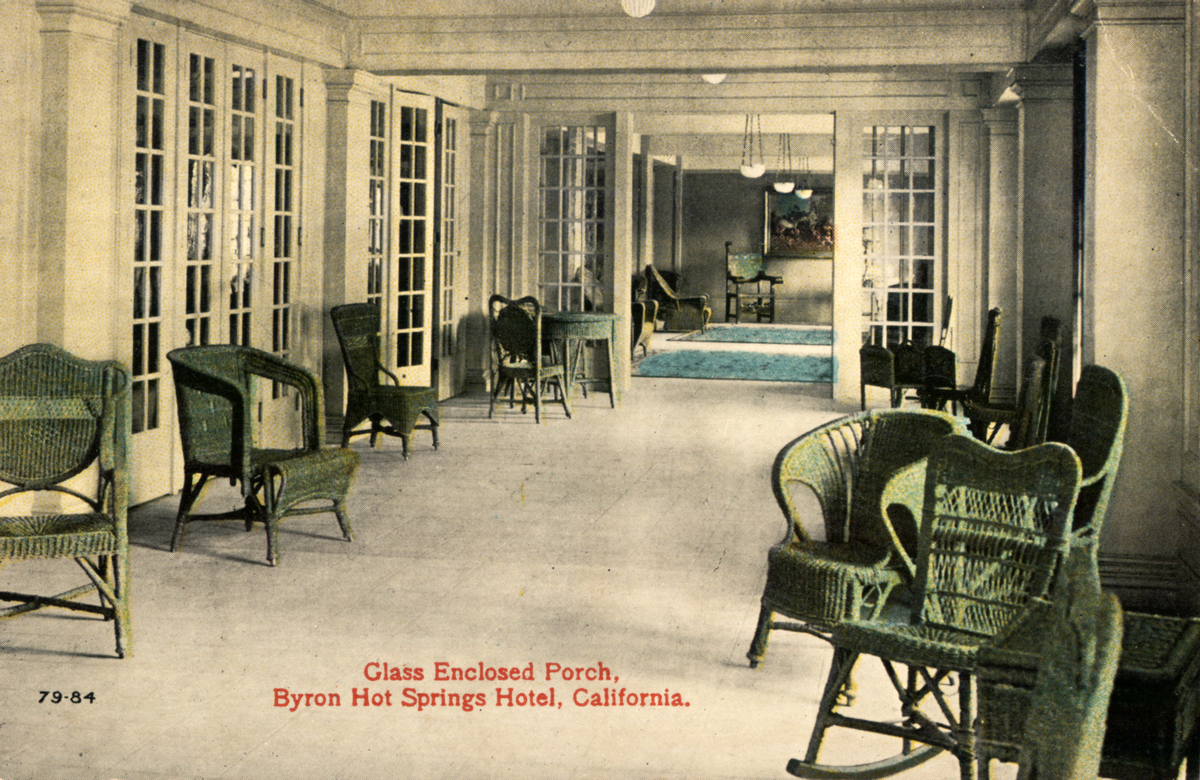 The glass-enclosed porch at Byron Hot Springs Hotel (Circa 1910?) 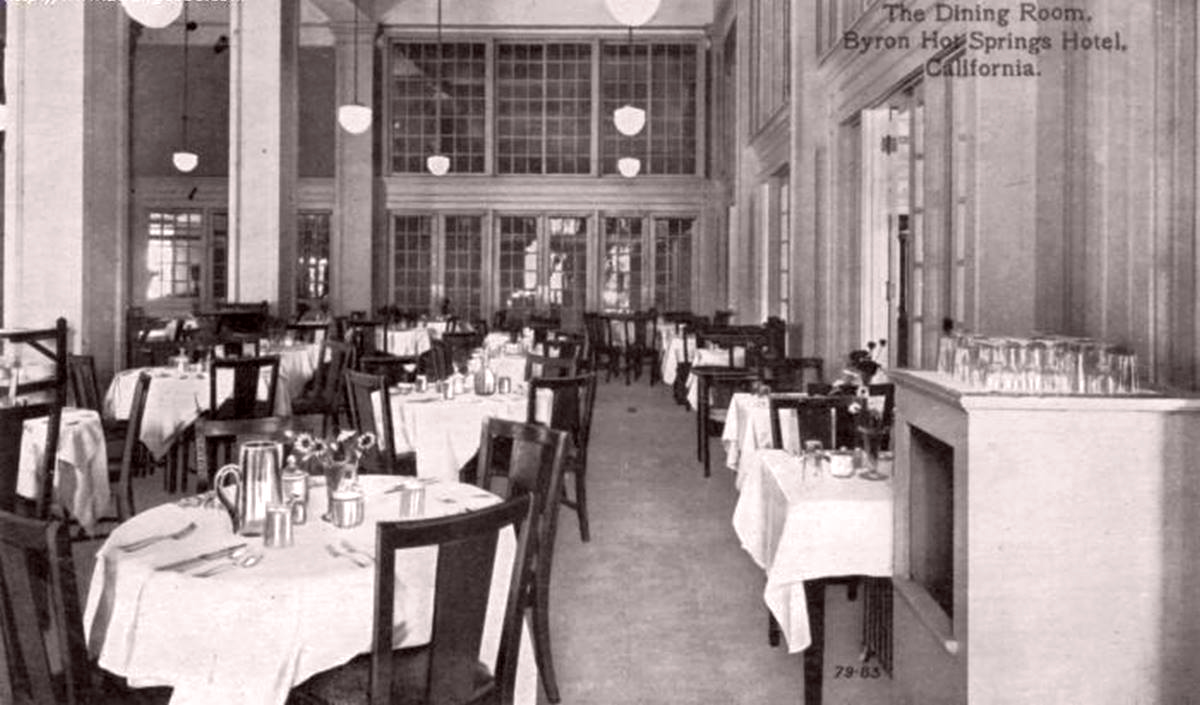 The dining room at the Byron Hot Springs Hotel (Circa 1910?) 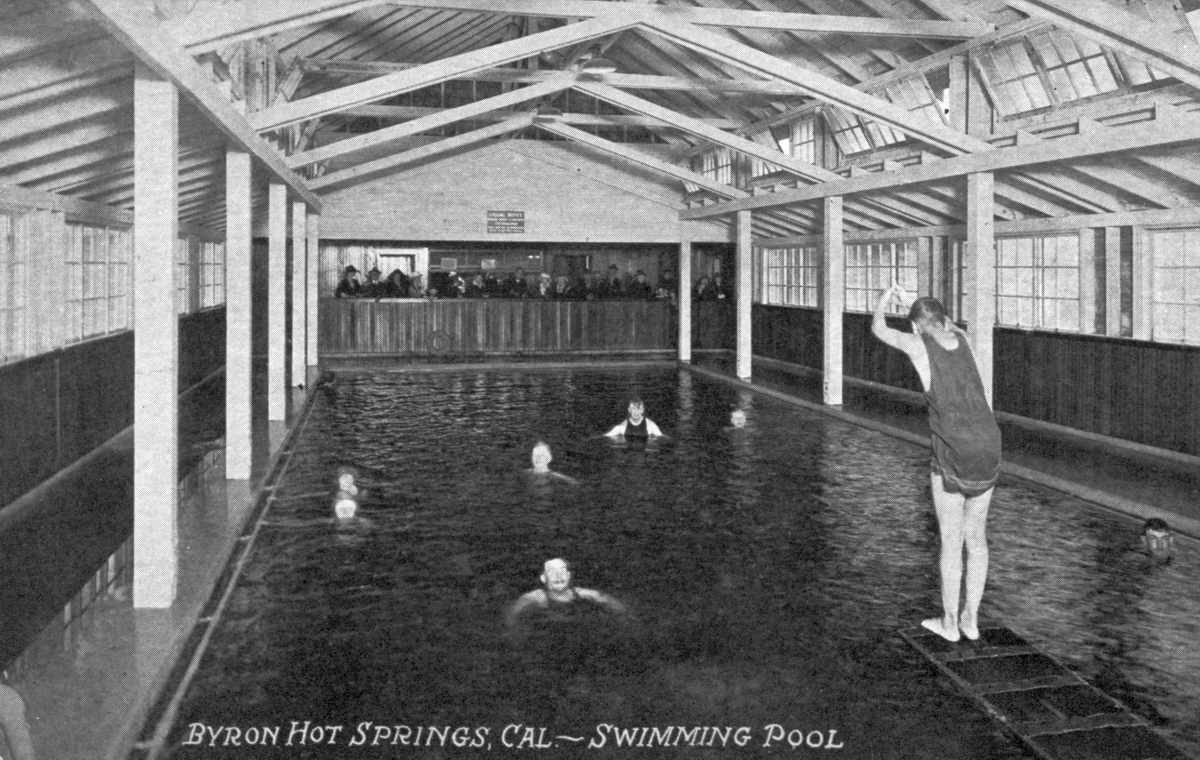 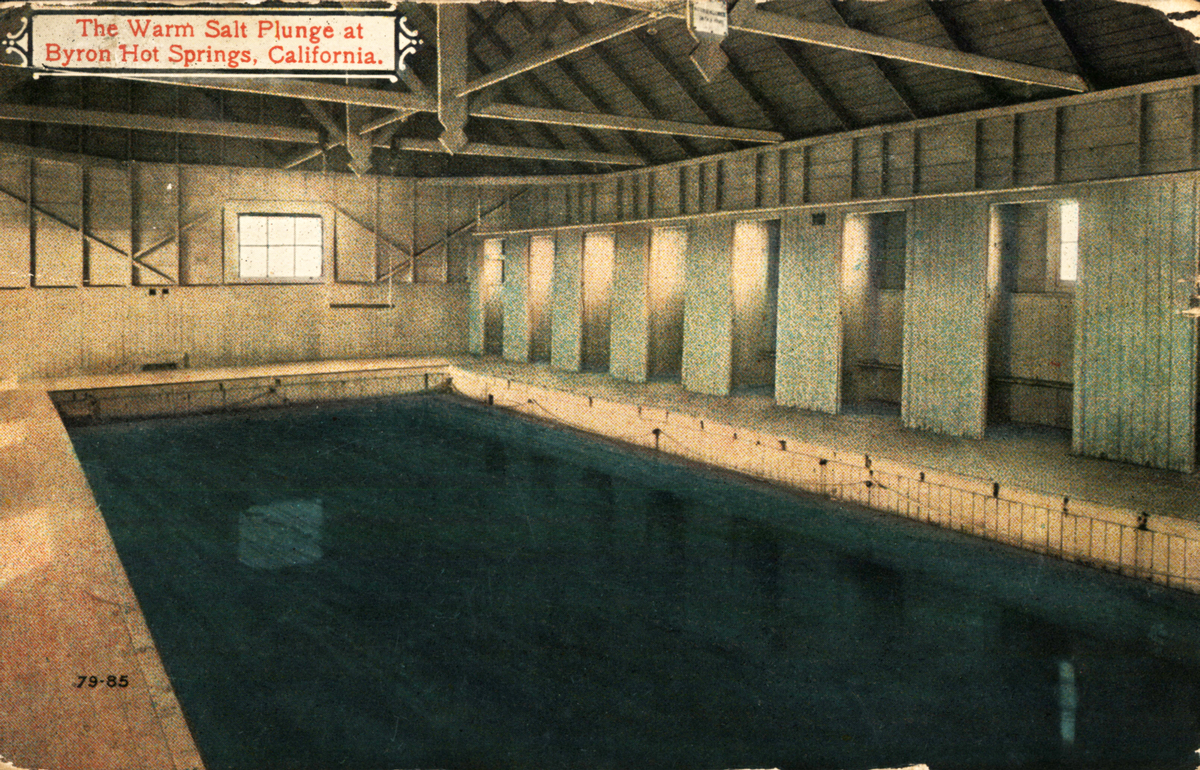 The warm salt plunge at Byron Hot Springs (Circa 1905?) 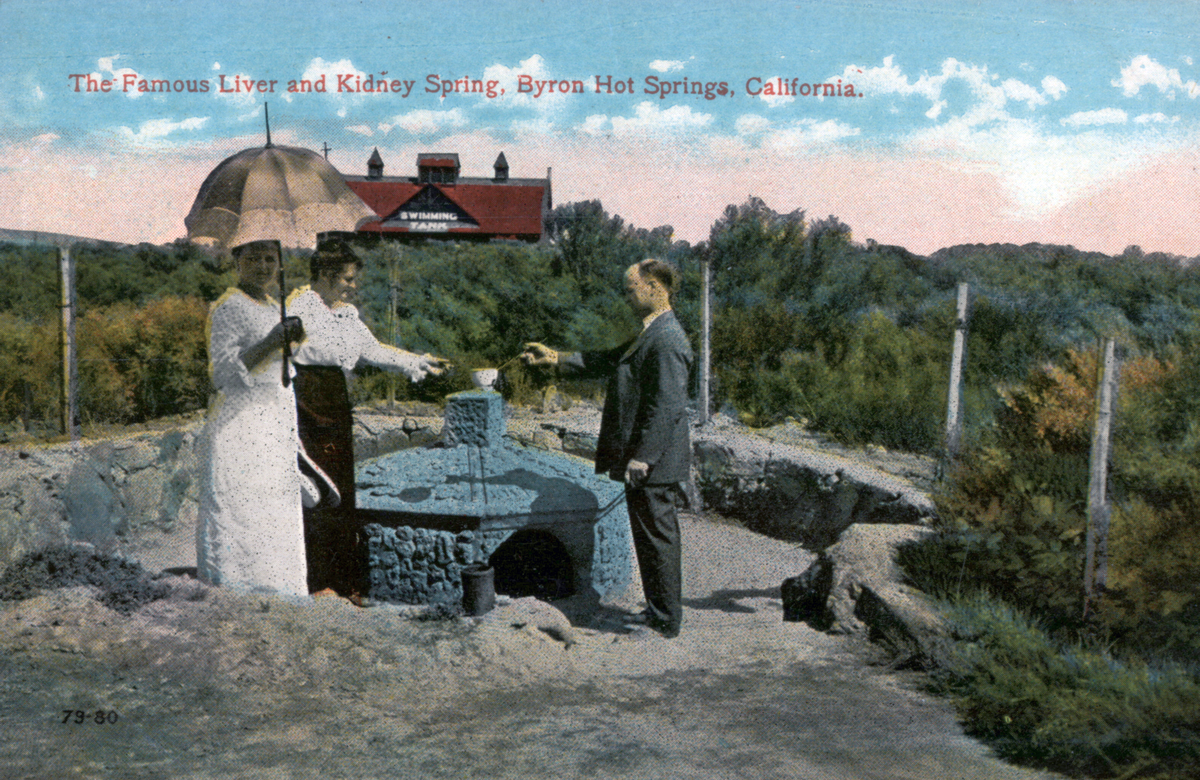 The Famous Liver and Kidney Spring at Byron Hot Springs, with the Swimming Tank building in the distance (Circa 1910?) 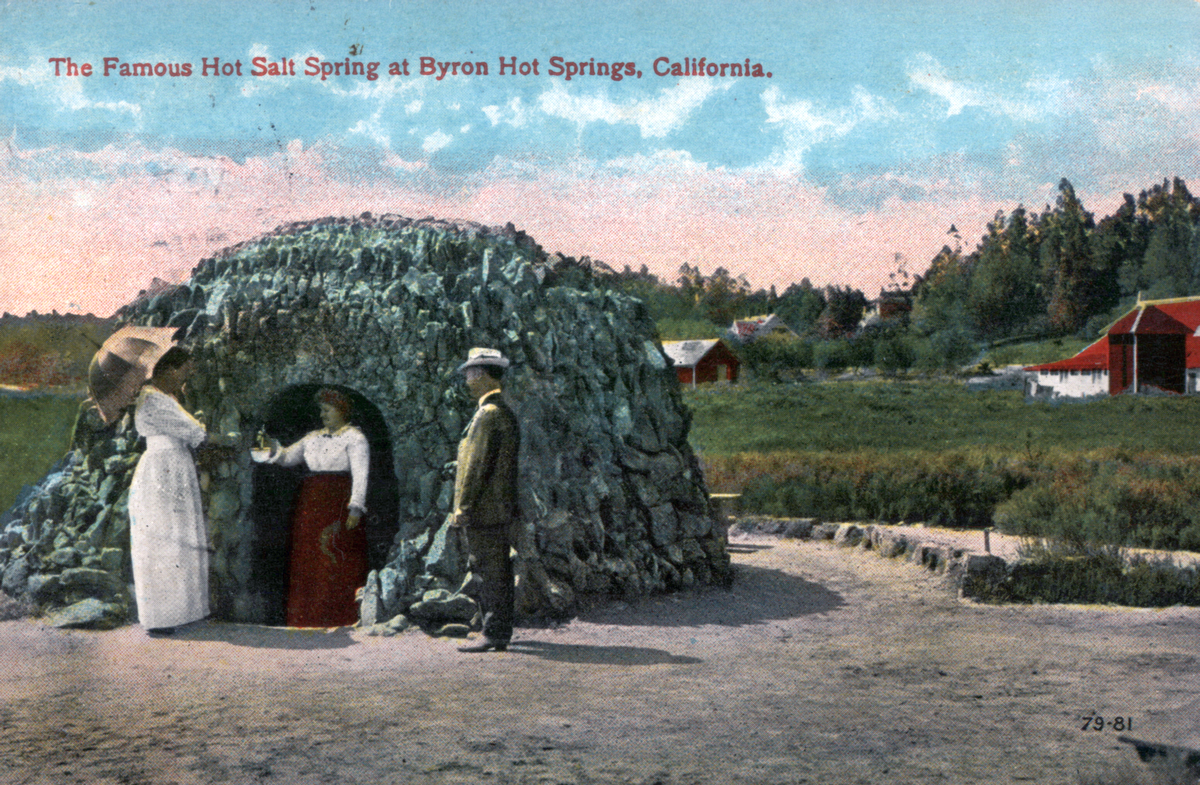 The Famous Hot Salt Spring at Byron Hot Springs (Circa 1916) 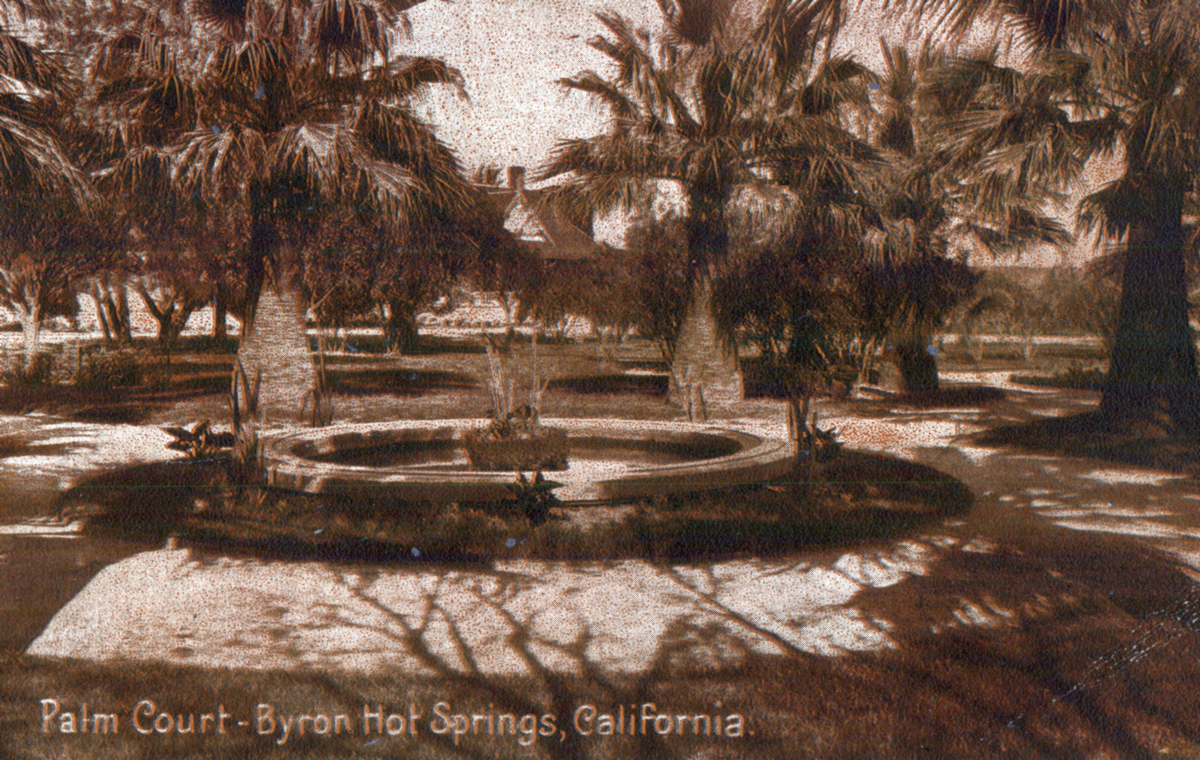 The Palm Court at Byron Hot Springs (Circa 1913) 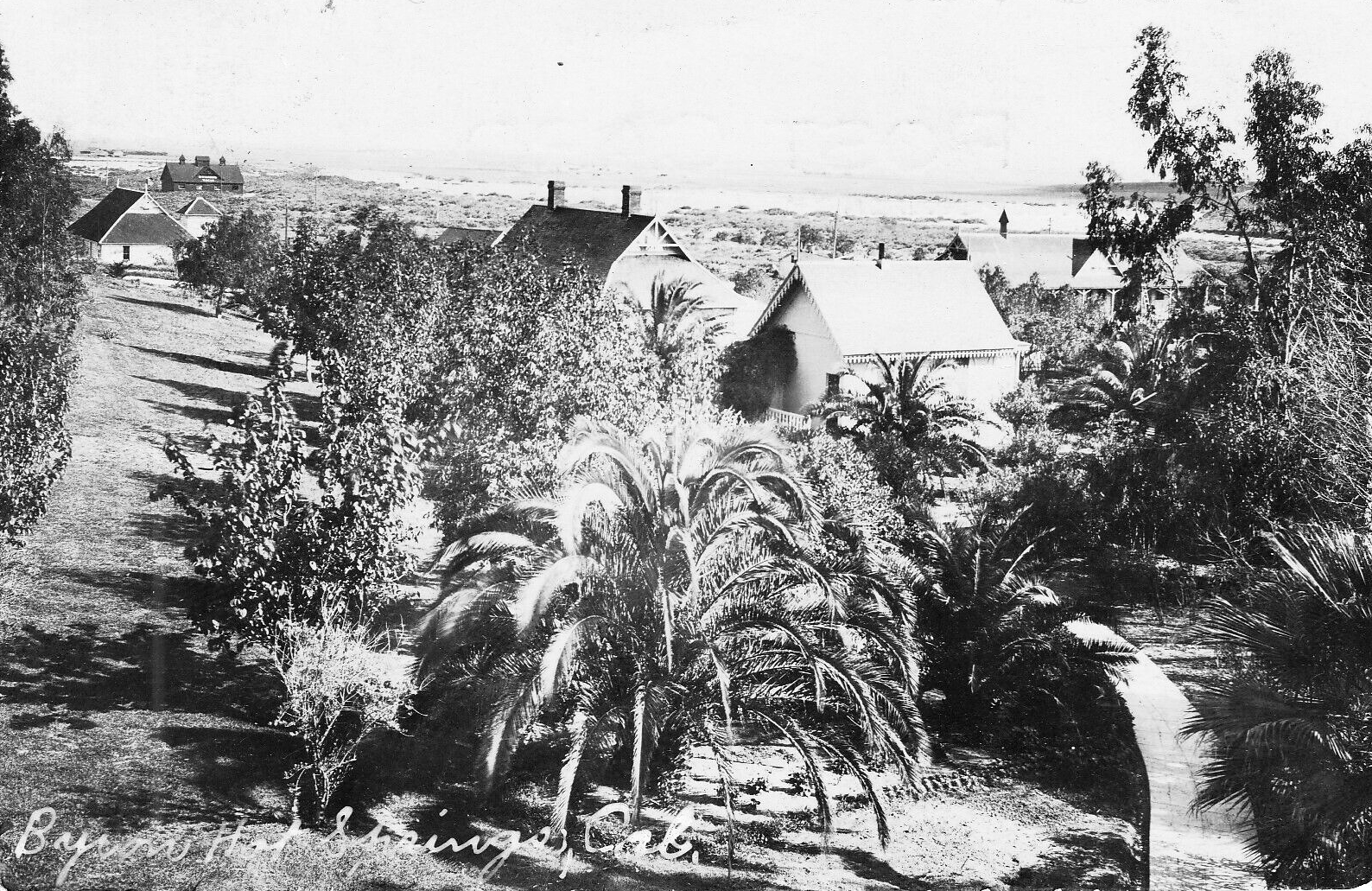 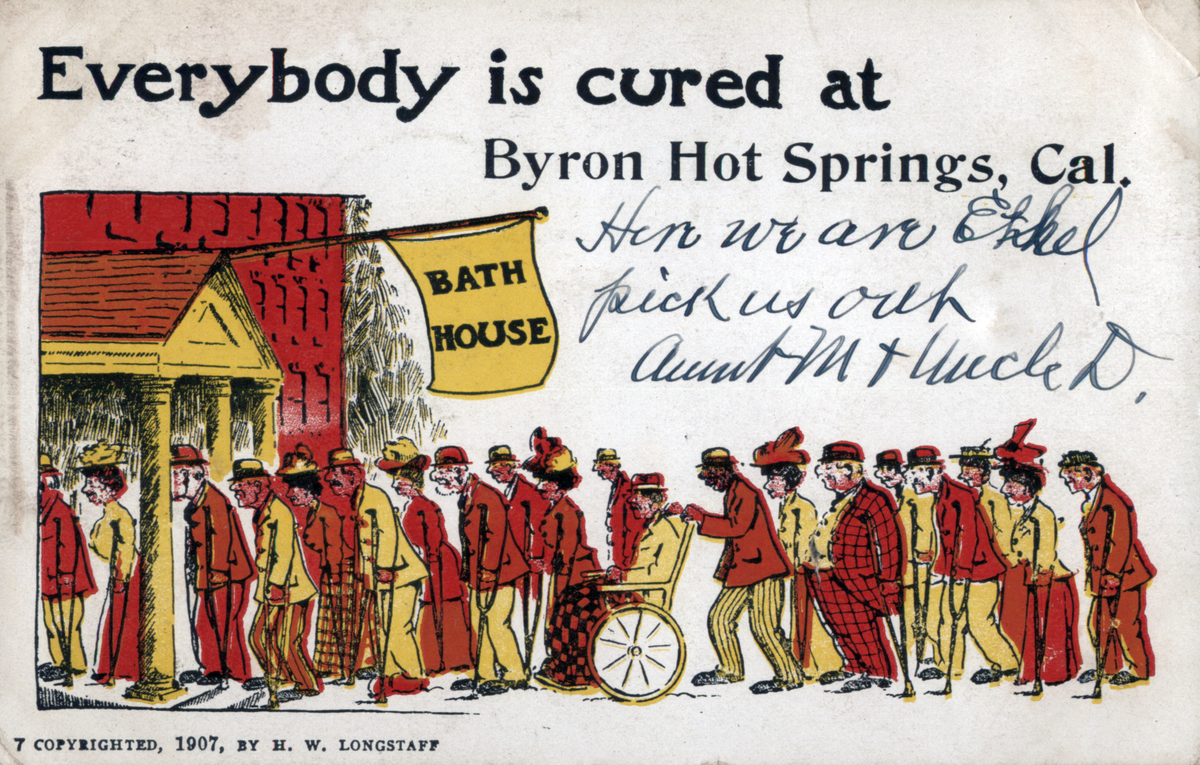 A 1907 postcard proclaiming that “Everybody is cured at Byron Hot Springs, Cal.” The handwritten message reads “Here we are, Ethel. Pick us out. Aunt M & Uncle D.” 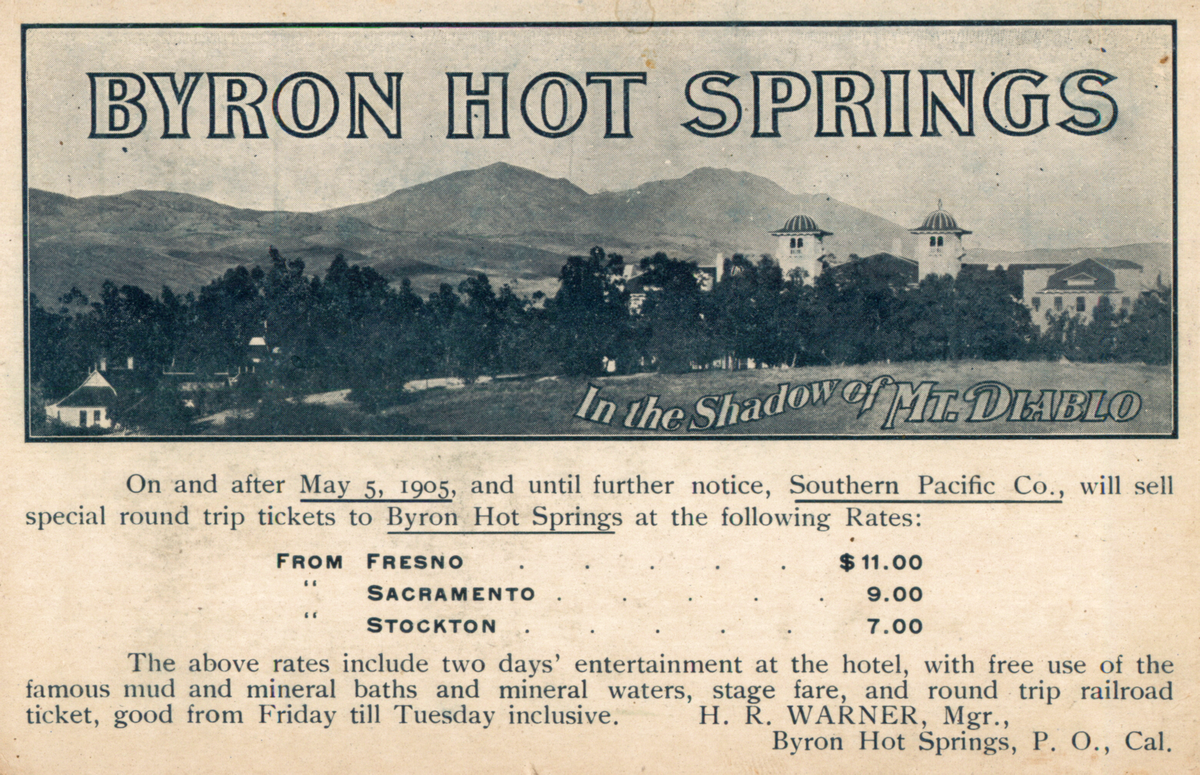 A Southern Pacific Railroad rate card for round-trip travel to and from Byron Hot Springs, on or after May 5, 1905, including two days of “entertainment at the hotel, with free use of the famous mud and mineral baths.”

Numerous attempts have been made over the past six decades to rebuild and revitalize the old Byron Hot Springs property into a resort, hotel, gambling hall, entertainment venue, and/or championship golf course. To date, none has succeeded. 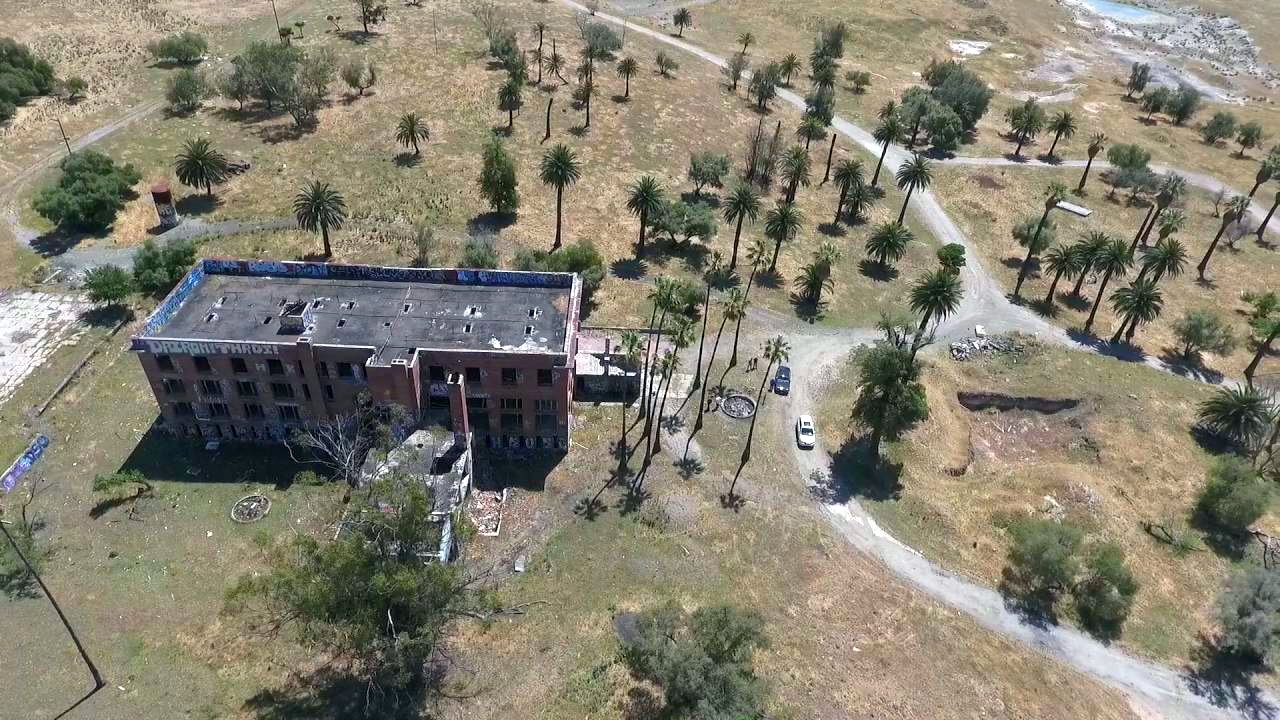 Much of the area immediately surrounding the old hotel property is currently owned by G3 Minerals, a subsidiary of Modesto’s Gallo Wine family, which extracts the fine-grade silica sand there for conversion into glass bottles, and for other uses – including in sand traps on golf courses across the United States. 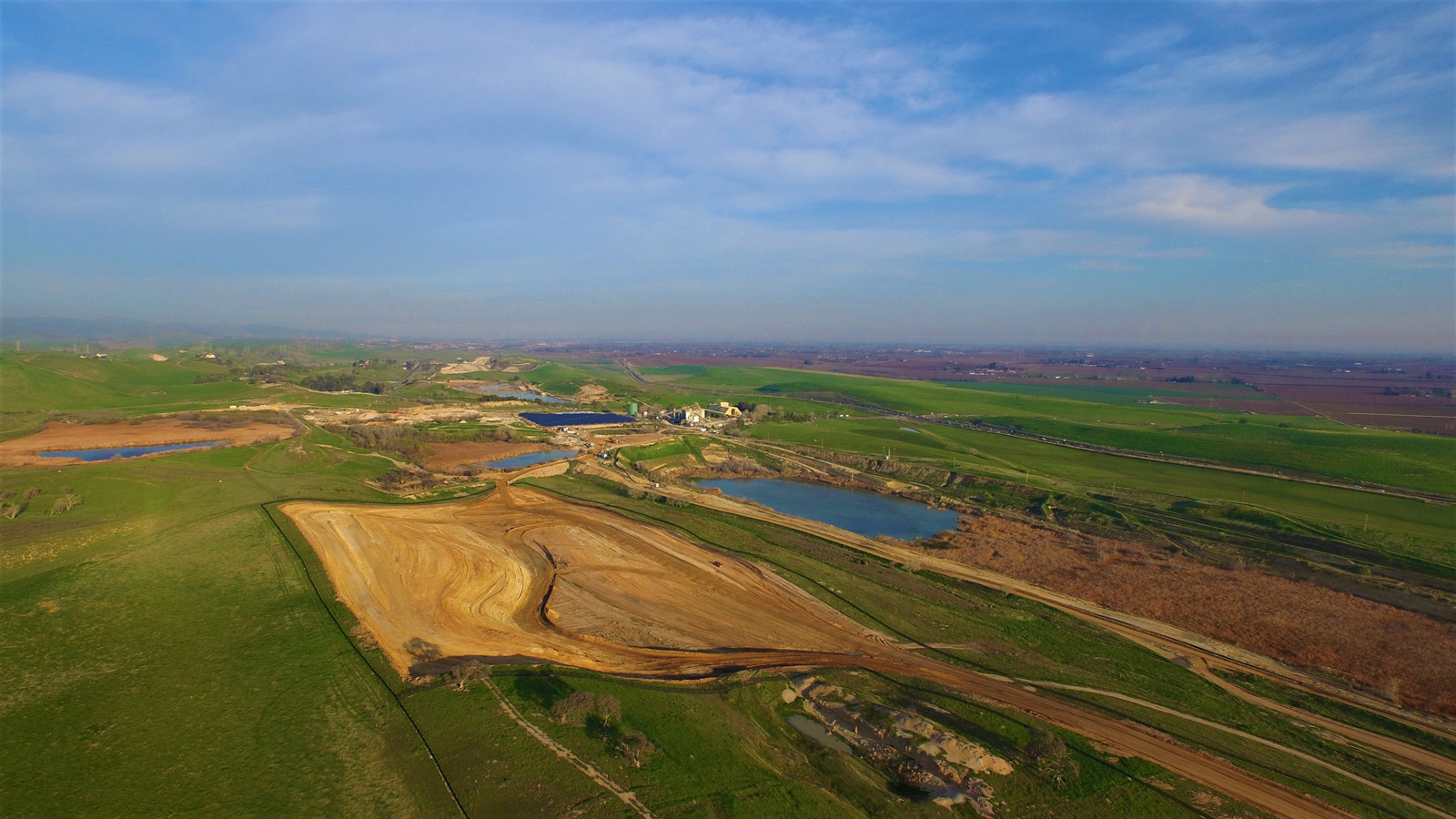