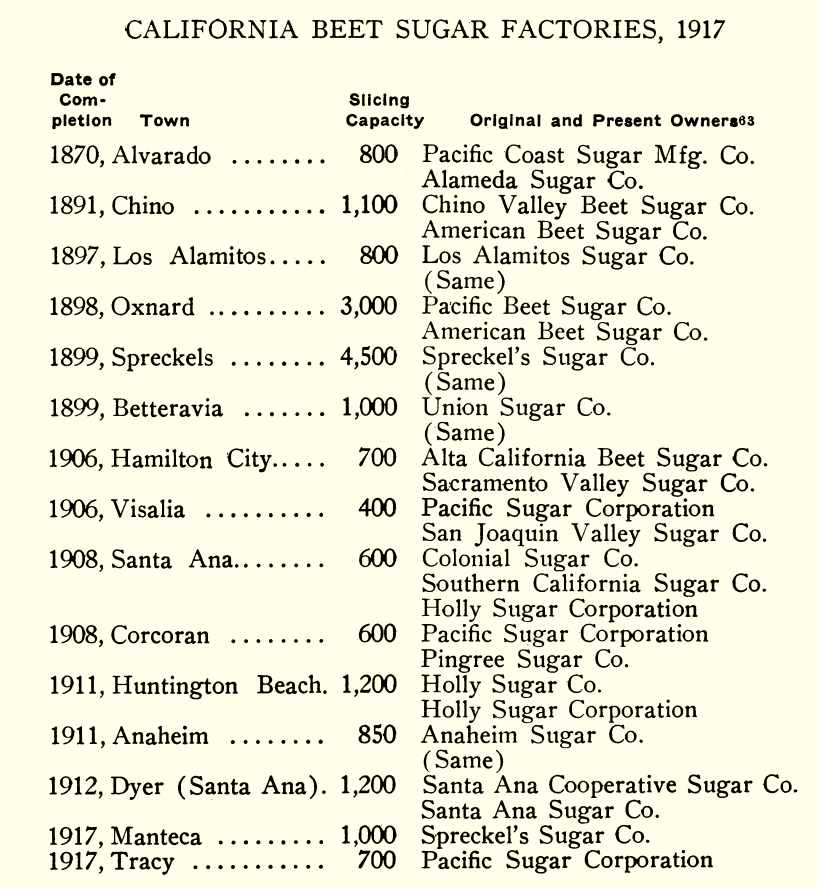 The fifteen sugar beet refineries open and operating in California in 1917, the year the Pacific Sugar plant at Tracy went online.
(From “History of the Beet Sugar Industry in California” by Torsten A. Magnuson, A.M., published in the Annual Publication of the Historical Society of Southern California, 1918)

Pacific Sugar of Tracy was sold to the Alameda Sugar Company of Alvarado in 1920, and both facilities were acquired by Holly Sugar of Colorado Springs, Colo., in 1926.

The Alvarado plant, which opened in 1870, is considered to be the birthplace of the American beet sugar industry. It also used barges to transport beets to its facility – located near San Francisco Bay in present-day Union City – until rail service was established there. 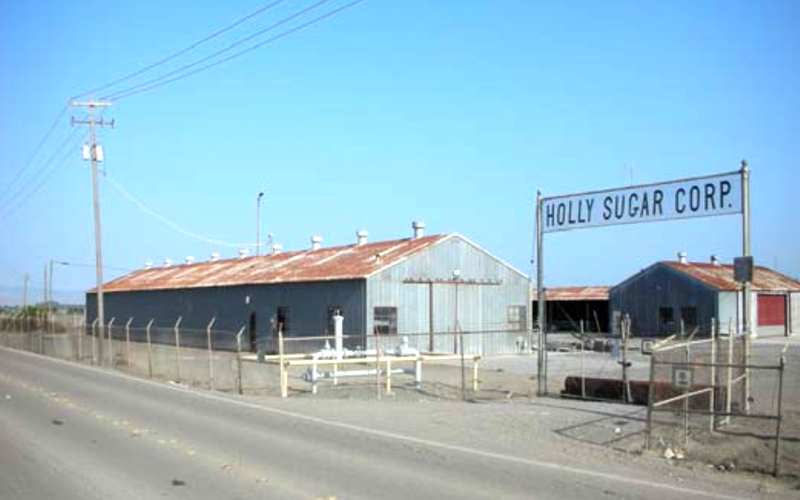 In Tracy, the Southern Pacific constructed the “Sugar Spur,” about 2.25 miles of track running from the main SP yard near downtown out to the refinery to expedite beet delivery. For years, the beets were grown locally; however, due to capacity limitations at other refineries, beets would arrive here from throughout the west to be processed. 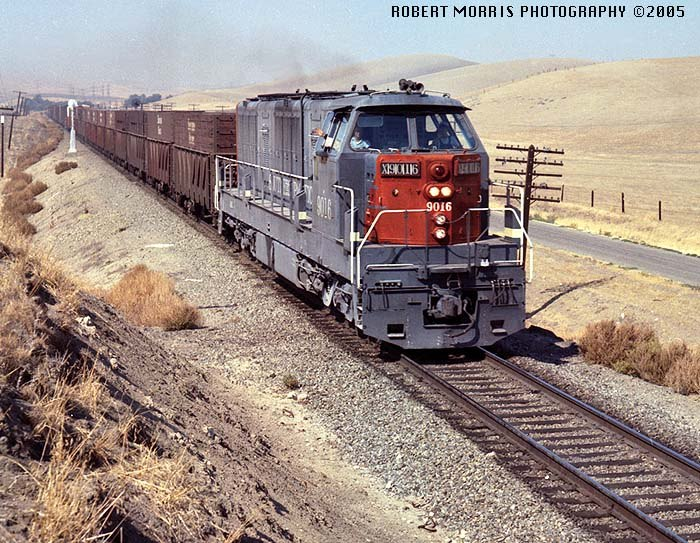 A Southern Pacific beet train – led by a unique German-built Krauss-Maffei locomotive – rolls alongside Patterson Pass Road in the Tracy foothills in this mid-1960s photo by the legendary Bob Morris.

Long trains made up almost entirely of large open “beet racks” subsequently rolled into Tracy, carrying loads of sugar beets that would be washed, sliced and soaked to produce the syrup that was refined to create sugar crystals. 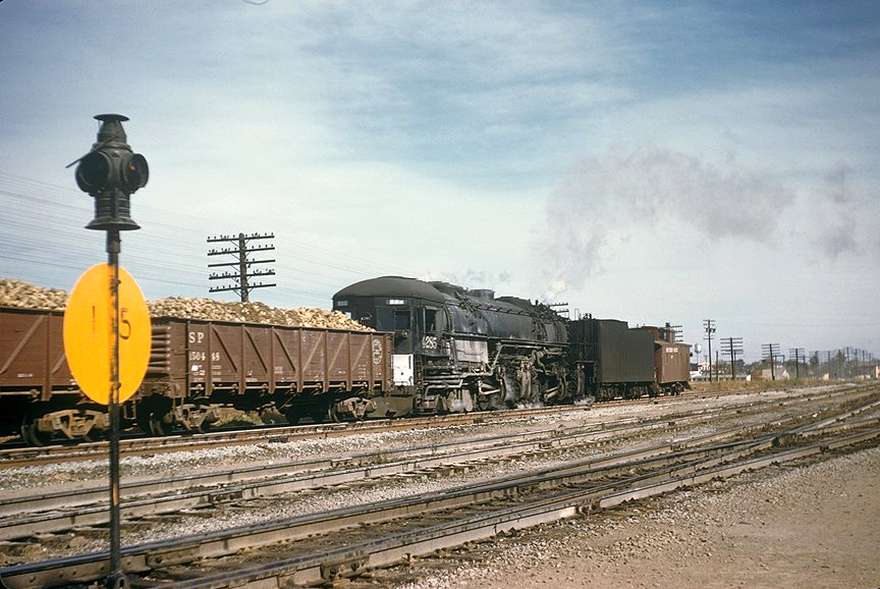 A train loaded with sugar beets arrives in the Southern Pacific’s yard on the west side of Tracy, having just traversed the Altamont Pass on its way into the Central Valley

Although the Tracy refinery is now closed – the property is currently used for storage, as a trucking company freight yard, and will eventually become the site of large, modern warehouses – its final years included some of the most interesting railroad activity in the region.

The Southern Pacific Railroad originally used its own motive power to shuttle beets out to the refinery, but Holly Sugar later acquired its own locomotives to handle the task. 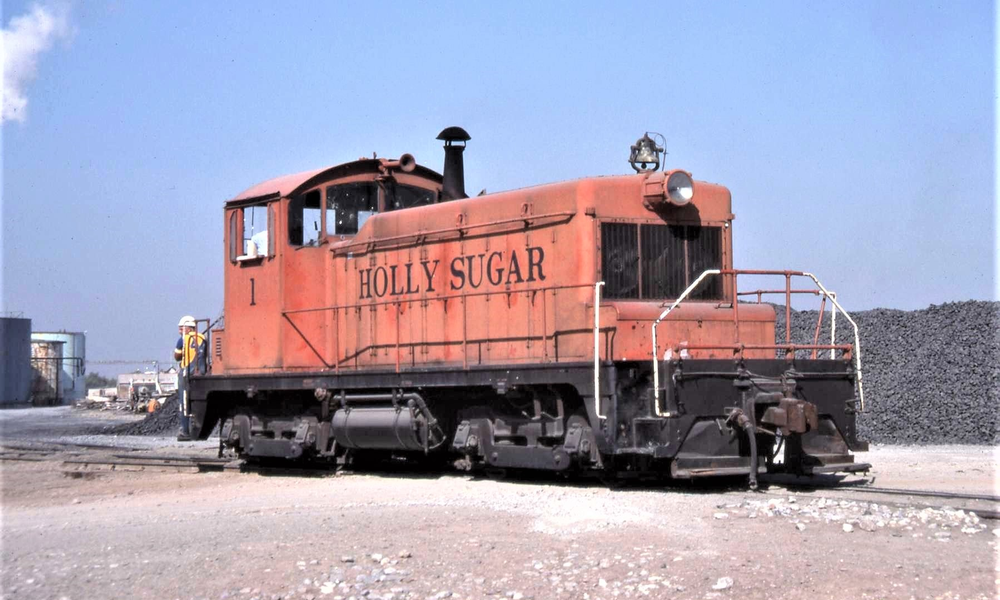 One museum-worthy piece of equipment was Holly Sugar’s locomotive No. 1, an Electro-Motive Corp. (EMC) SW1 that holds the distinction of being the very first wholly-owned diesel-electric locomotive obtained by the Southern Pacific.

Originally built as demonstrator #804 by EMC, the Espee took it for a test drive starting in February 1939 – just days after it came off the assembly line – and purchased it in April of that year, renumbering it as their #1000. It remained in use by the SP until December 1967, and was sold to Holly Sugar in January 1968.

The old 1000 was repainted by SP into bright orange Holly Sugar livery in January 1969, with a big “1” under the cab window, and went into service for the company as HLYX 1 at their plants in California, finally reaching Holly’s Tracy facility five decades into its life. 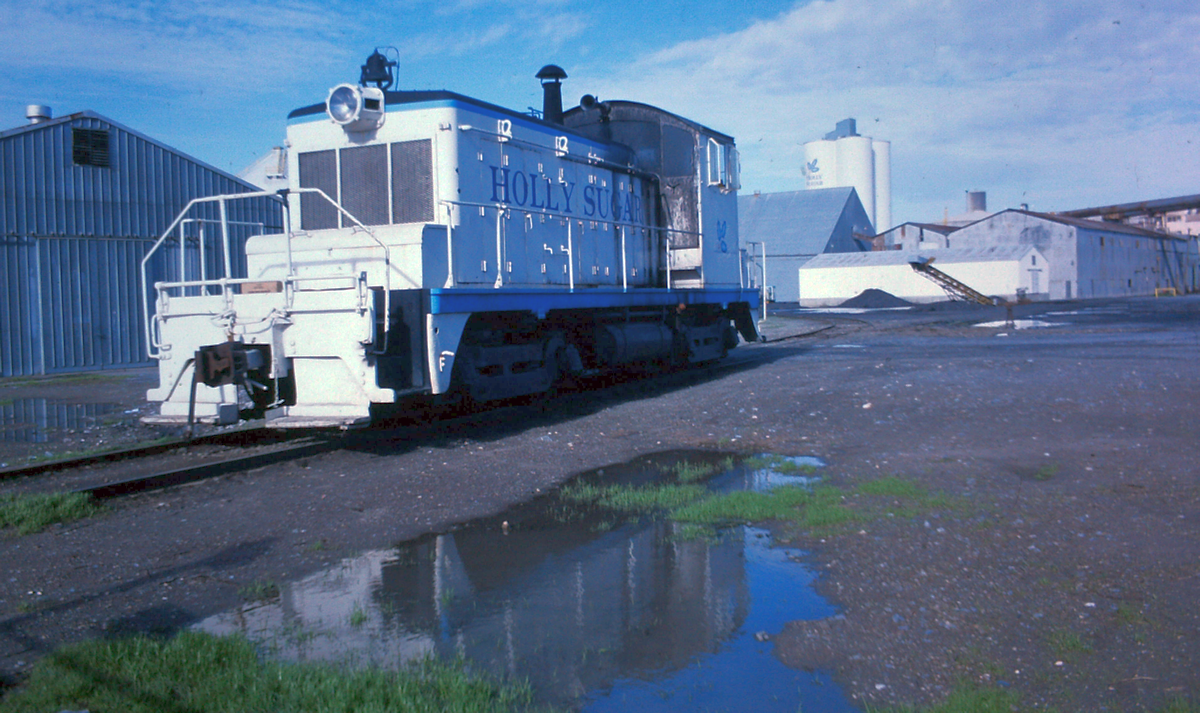 Around 1991, the locomotive was repainted from faded orange to a bright, sugary white with baby blue trim, the big “1” on the cab replaced by a sprightly sprig of holly.

HLYX 1 remained in service until September 2005, when it was packed up and shipped to the California State Railroad Museum in Sacramento.

(As I write this, it remains in storage at CSRM, more than eighty years after it was built, patiently awaiting restoration.)

The old SW1 was replaced at Tracy by a compact General Electric 25-Ton switcher, a 150-horsepower “critter” built in September 1946 at GE’s Schenectady, N.Y., plant. The pint-sized engine has remained at the refinery, quietly stationed under the huge silos, well after the plant was closed down. 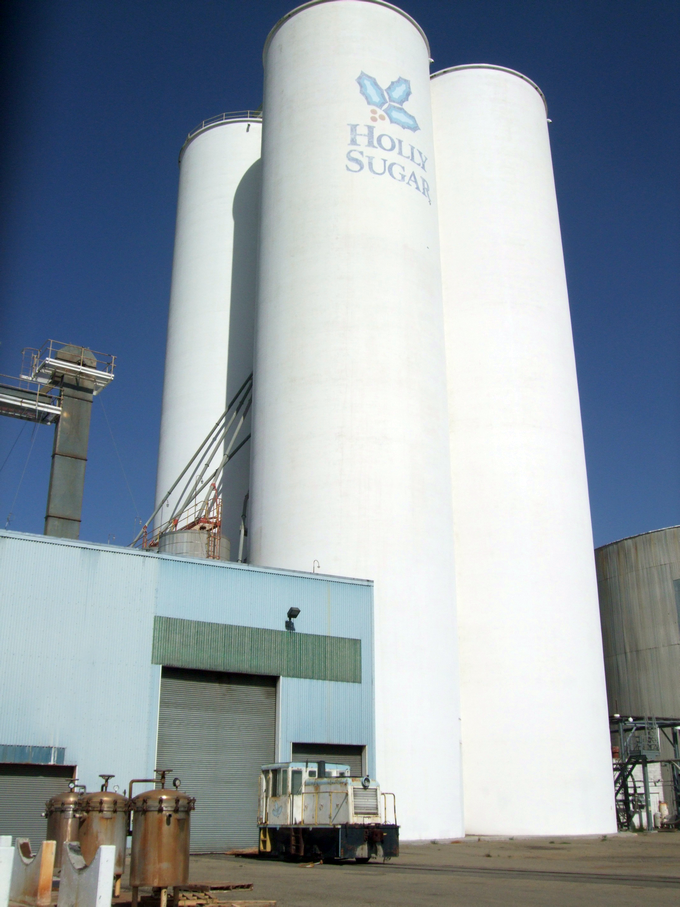 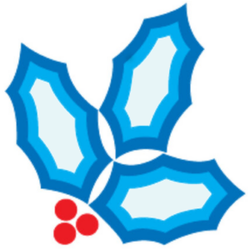 At the end of the Twentieth Century, through a variety of corporate mergers, the facility was operated under the Spreckel’s Sugar banner, producing a record 190-million pounds of sugar (in standard 100-pound bags) in 1999.

Despite the previous year’s record output, the refinery operation was discontinued at Tracy in December 2000. The facility continued to be used for packaging and shipping sugar until the entire operation was closed down in 2009. 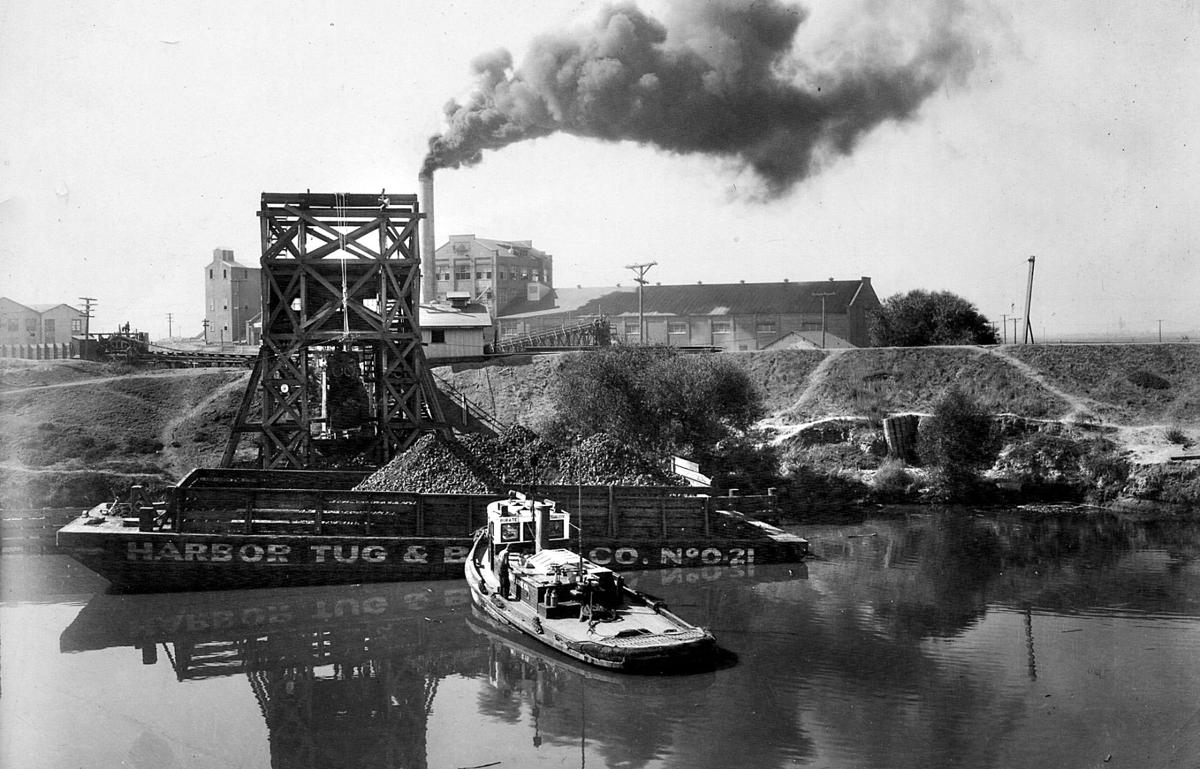 Prior to the extension of the “Sugar Spur,” beets were transported to the sugar mill on barges via the Sugar Cut, a man-made inlet dug from Tom Paine Slough to the refinery.
(Tracy Press photo) 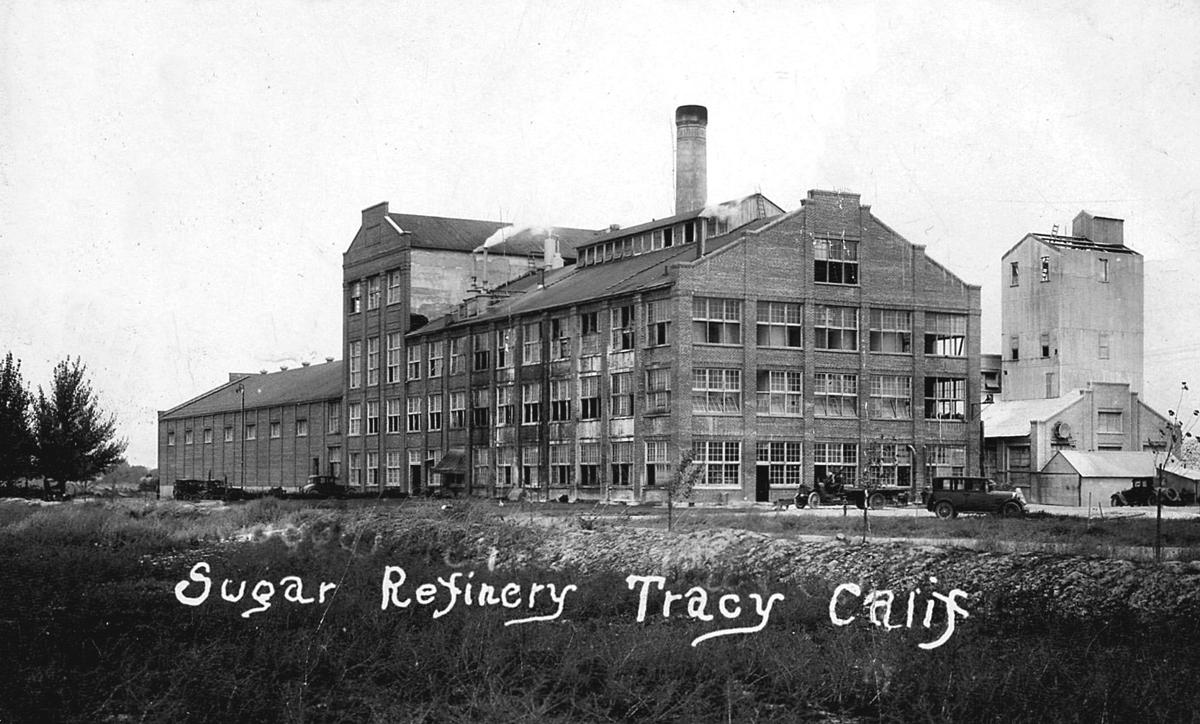 The sugar refinery at Tracy, circa 1930s.

A 1973 Southern Pacific “SPINS” map – a handy “aid to navigation” for train crews – showing the track schematic at the Holly Sugar plant.
(Click to enlarge) 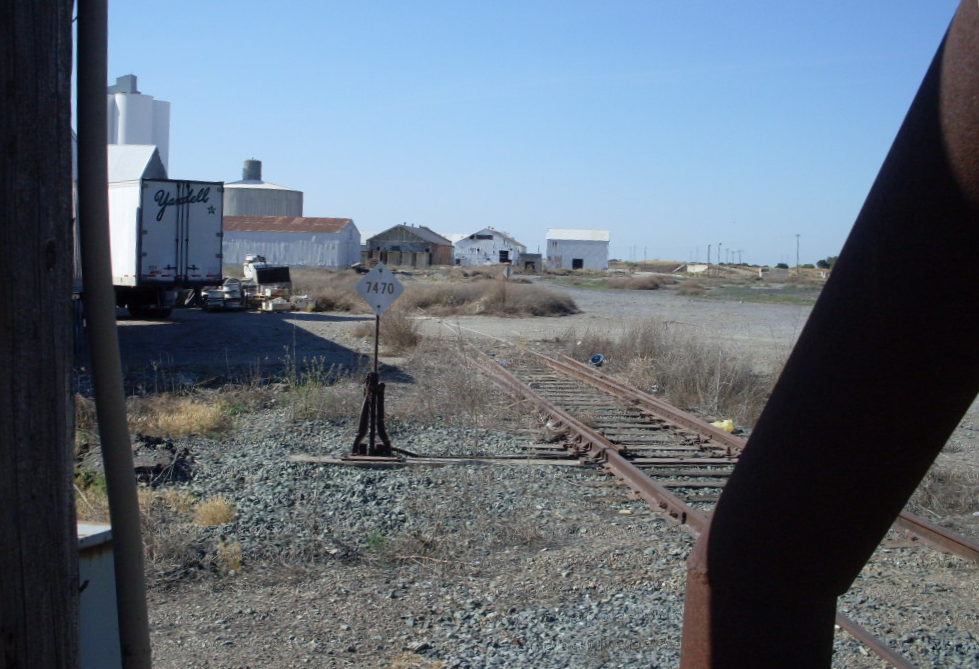 A tip of the engineer’s cap to the Tracy Press, Jay Roberts, and Bob Morris for their kind permission in allowing us to include photos from their archives in this article. Mr. Morris – known far and wide within the railfan community as “PhotoBob” – offers historic photos from his vast collection to the public on his website.