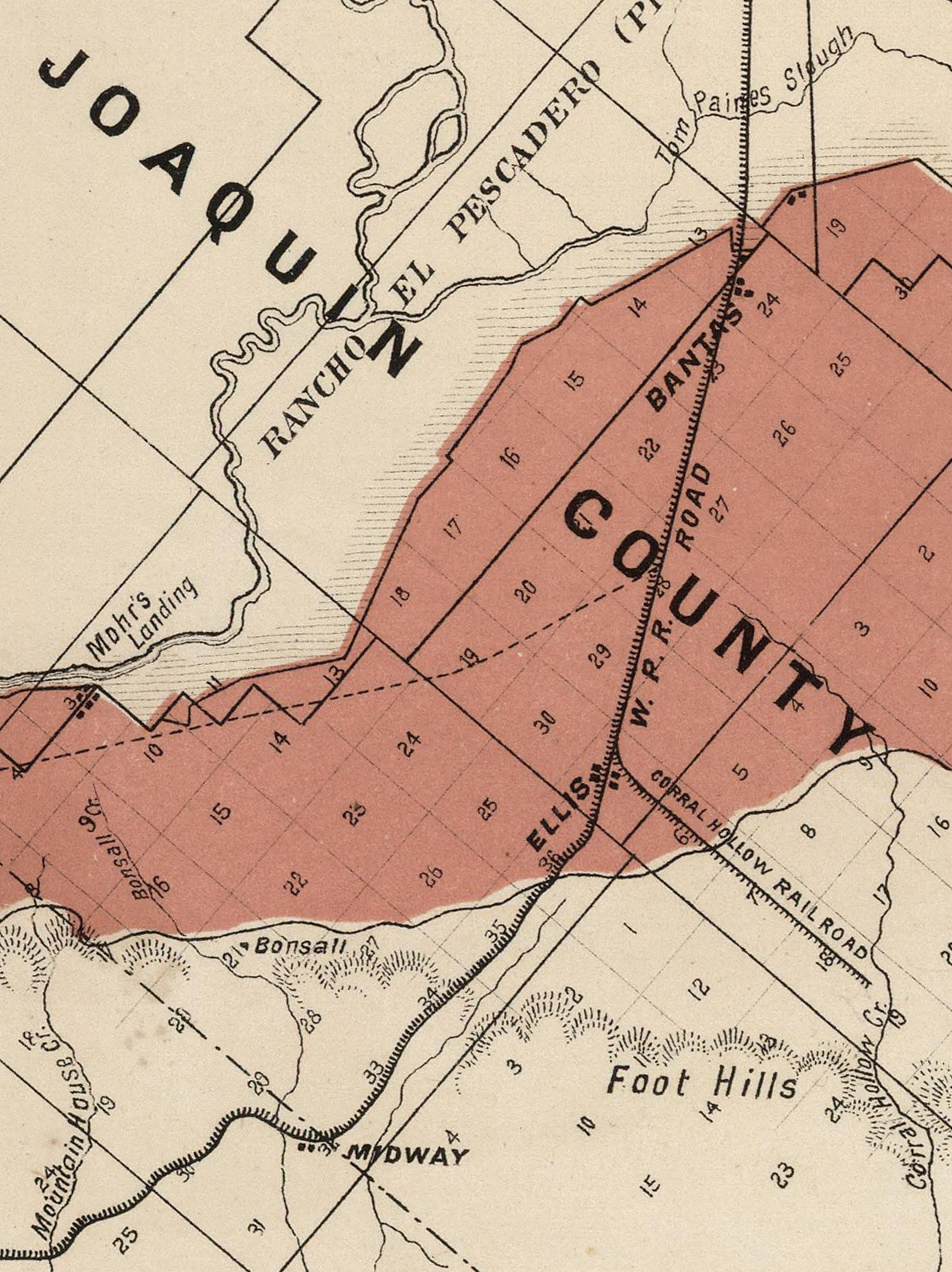 Undeterred, the Central Pacific’s controlling director, Leland G. Stanford, simply found a fairly unused stretch of land south of Stockton and had his surveyors plot out the maintenance facility there. He named this place Lathrop, after his wife’s maiden name. The location was perfectly situated on the line between Sacramento and the Bay Area, and became the connecting point for yet another extension of the CPRR, down the Central Valley to Southern California, paralleling for the most part the current-day route of Highway 99. 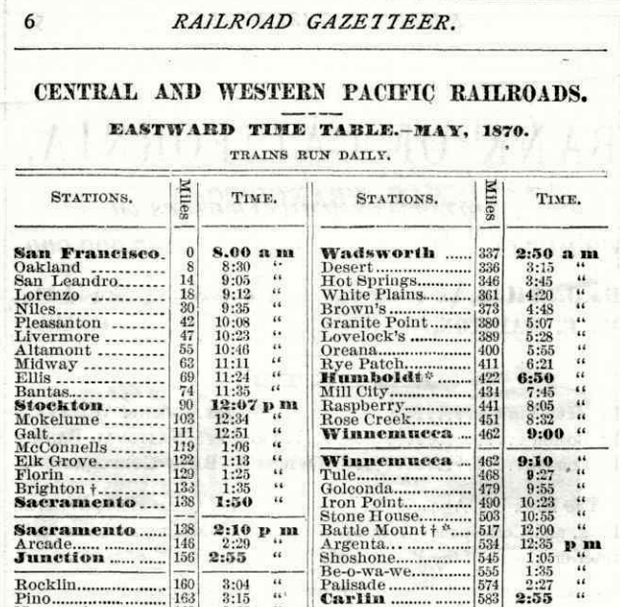 The Central Pacific’s May 1870 timetable shows stops at Midway, Ellis and Bantas on the way east from Oakland via the original Western Pacific … but no Lathrop or Tracy (yet).

The Central Pacific grew rapidly and soon made plans for another extension, this one creating a shortcut to its Northern Railway subsidiary at Martinez on the edge of San Pablo Bay down to the CPRR’s existing Western Pacific line from the Bay Area to Lathrop. Sensing the chance to grow their town, the residents and business owners of Bantas pushed to have the extension line terminate in their town. 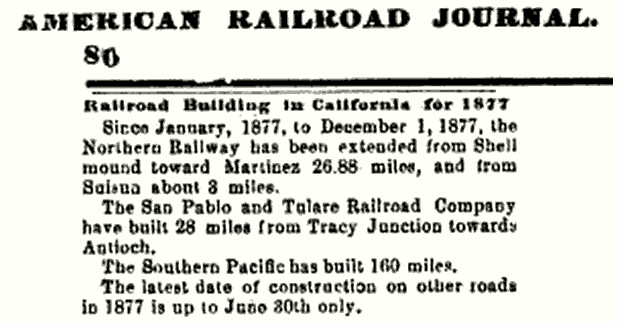 Instead, a decision was made to end the new line – incorporated as the San Pablo & Tulare Extension Railroad Company – at a spot about halfway between Bantas and Ellis on the original Western Pacific transcontinental mainline, where it would meet up with yet another new CPRR subsidiary line that would run down the verdant west side of the San Joaquin Valley to Los Banos and, from there, on to Los Angeles and New Orleans as part of what would become the railroad’s “Sunset Line.”

By the end of 1877, nearly thirty miles of the new San Pablo & Tulare’s rails had been laid from the junction in Tulare Township to the outskirts of present-day Brentwood. 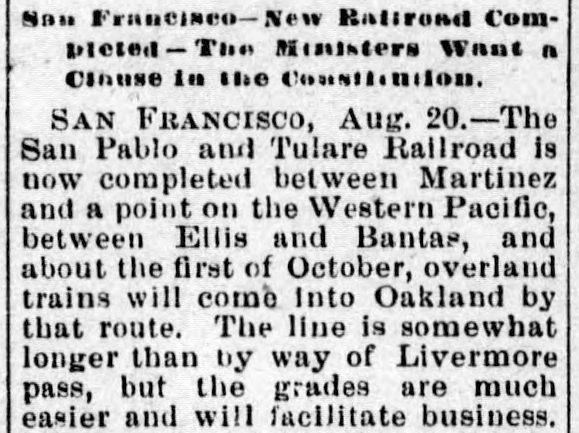 The Los Angeles Daily Herald of Wednesday, August 21, 1878, proclaims that the San Pablo & Tulare is complete, and trains will begin taking the line “about the first of October.”

By August 1878, the San Pablo & Tulare was complete from Martinez and, in the words of a contemporary newspaper report, “a point on the Western Pacific, between Ellis and Bantas.”

At this point, that “point” on the WP didn’t even have an official name yet – though it was irregularly (and perhaps informally) referenced “Tracy Junction” – but it was expected that trains would begin detouring on the SP&T route from Valley locations up and over to Oakland in early October of 1878, taking a “somewhat longer” route to the Bay Area than the previous transcontinental rail line over the Altamont and Livermore passes.

Being almost nearly flat, the grades (or slopes) on the new line were considered “much easier” than the climb over the steep Altamont Pass, which was projected as a means to “facilitate business” of both a freight and passenger nature.

(The railroad was required to couple on helper locomotives at Ellis in order to drag heavier trains over the Altamont; it was hoped that the new line would eliminate the cost of those helpers returning “light,” which produced zero revenue but required additional fuel and water, and wages for a full engine crew in both directions.)

By the end of 1878, travel journals published descriptions of the new route along the San Pablo & Tulare extension that was now carrying overland trains headed for the Pacific Coast. 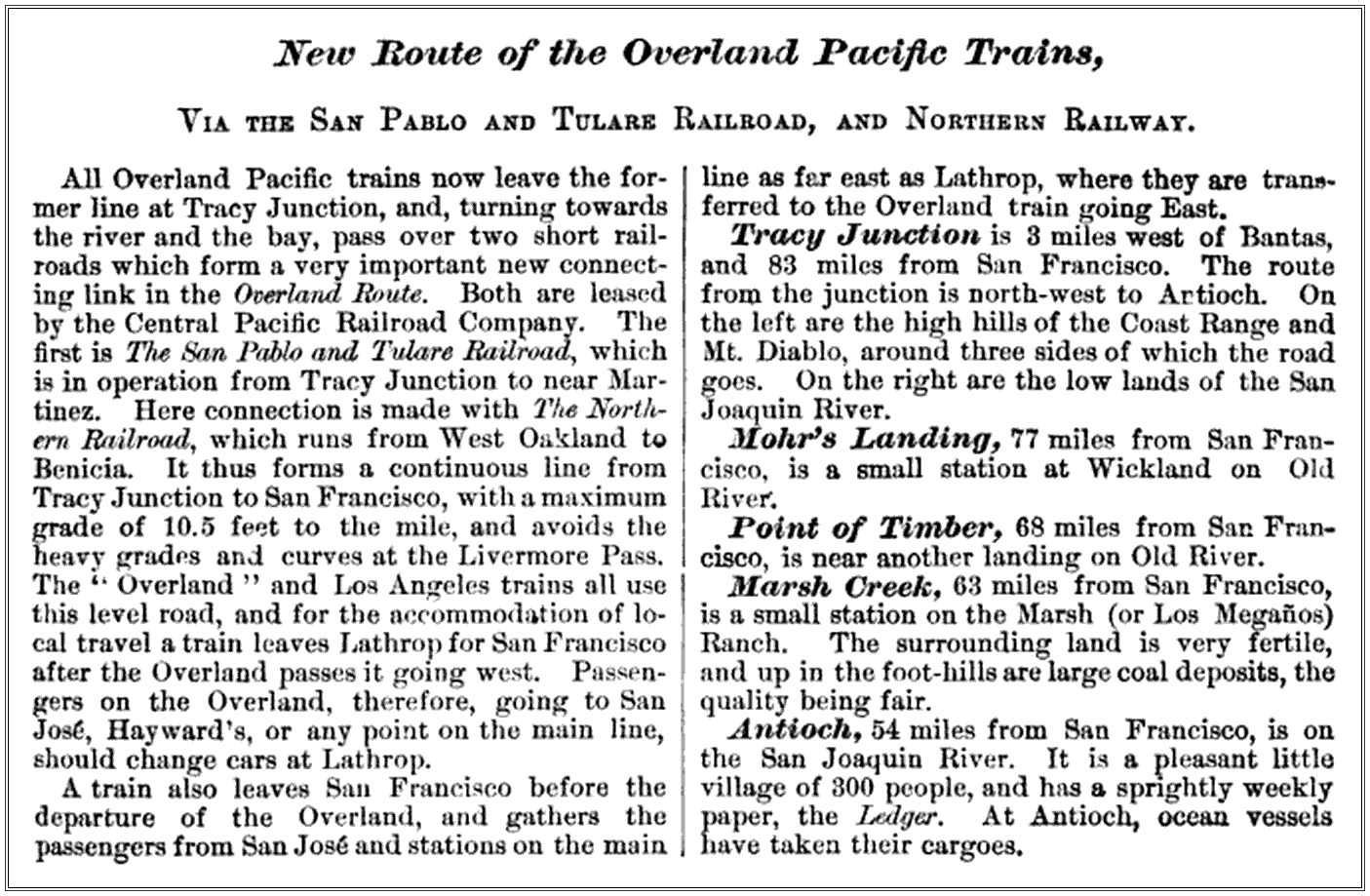 But now the Central Pacific had facilities at Lathrop and Ellis, plus another depot at Bantas and another in the foothills at Midway – but nothing at the junction where its rails from east and west and north and south would soon meet. Passengers heading into the Bay Area were transferred to trains at Lathrop, but there was nothing “there” at the new junction but a shack and a switchman to throw the switch to send trains to their appointed destinations.

After careful deliberation, and with a logical view of what made the best sense from an operating perspective, the decision was made to relocate all of the railroad’s local operations to the new junction – now known more regularly as Tracy Junction. A town would soon grow up around that one shack and that one switchman. 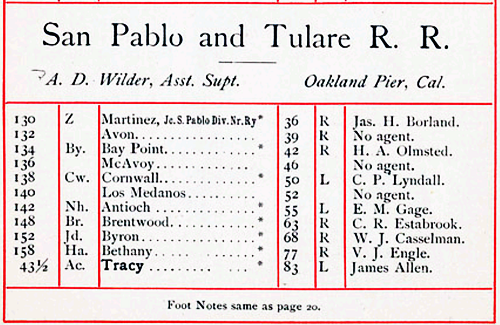 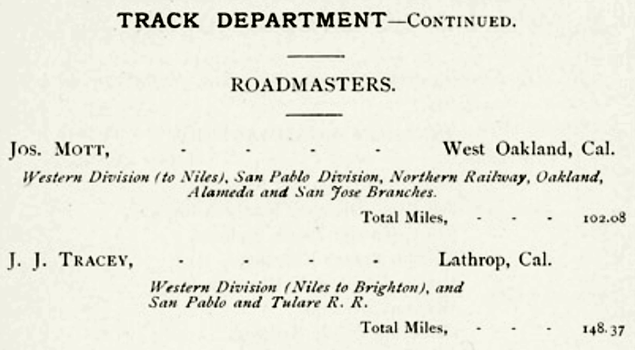 Denied the chance to become a major junction on the CPRR, Bantas over time lost its extraneous “s” and, in 1902, its railroad depot was torn down and rebuilt in Benicia, where it remains standing to this date.

Midway, up in the Altamont foothills, also lost its depot, but kept its United States Post Office open until 1918. The last Southern Pacific train rolled through Midway in the 1990s after which the SP’s rails were pulled up the rest of the way to Altamont; aside from a few scattered ranches, the area remains largely unpopulated. 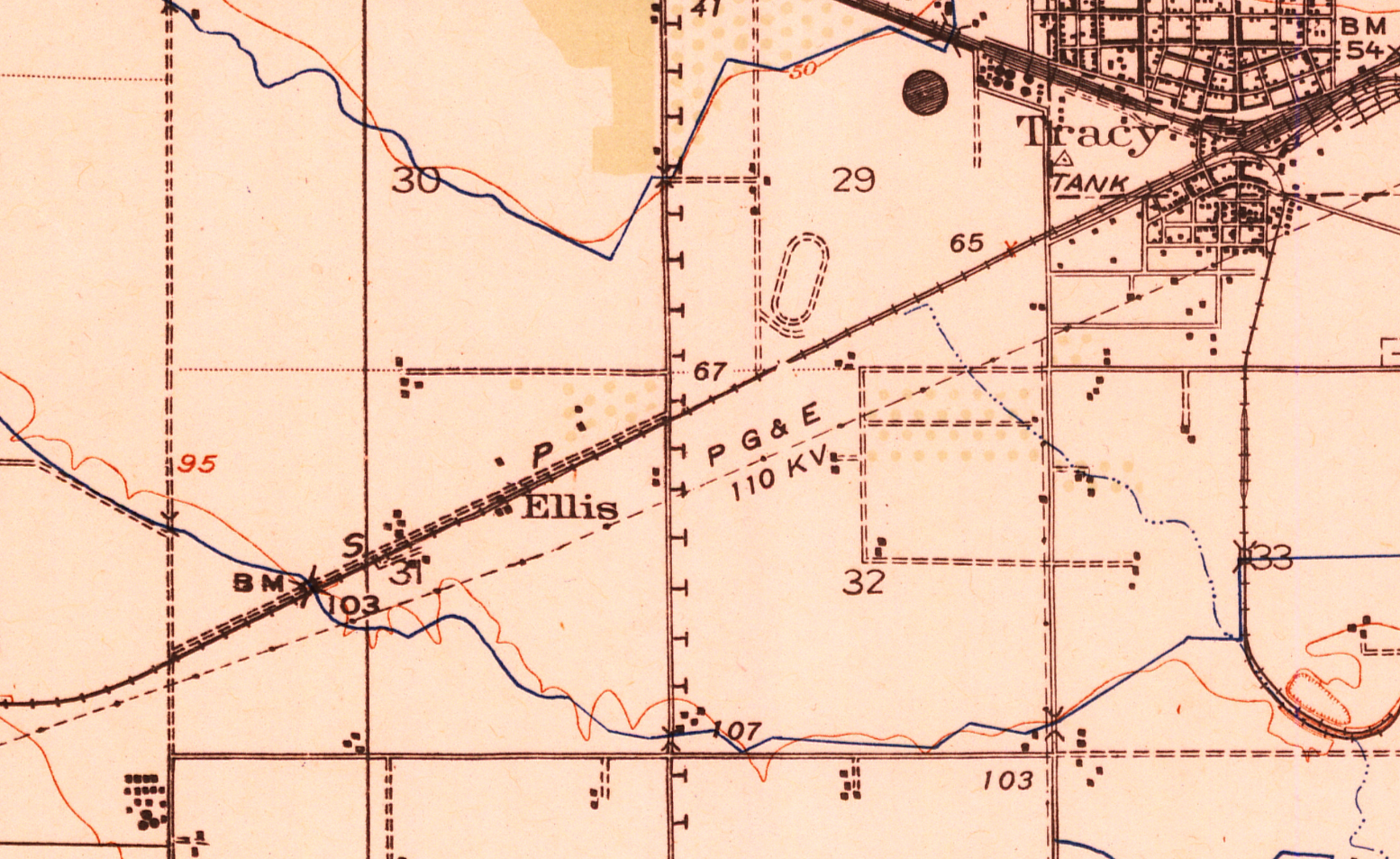 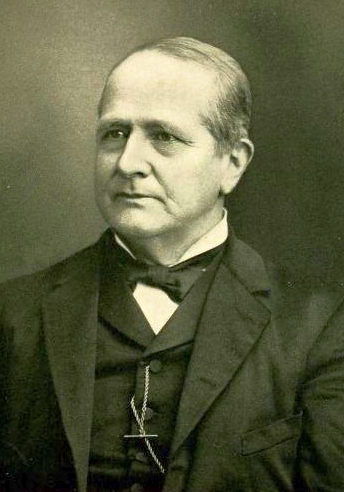