If you live in Tracy or its outskirts, you’re undoubtedly familiar with the names of the several villages that rest at the city’s edges. You know, places like Tesla, Carbona, Banta, Lyoth, Kerlinger, Ludwig, and Rhodes.

Wait. You’re not familiar with all those names? Well, sure, Banta is fairly well known — there’s still something there — but what about Carbona?

You may actually drive past the “Carbona Curve” on occasion and not know that it’s there. In fact, if you ride an ACE train through Tracy to or from points east (such as Stockton or Manteca), then you’ve rolled through Carbona.

Heading east from the Tracy ACE station on Linne Road, the first big “turn” you make on the way to Manteca is the “Curve,” where a collection of produce packing warehouses sit on one side of the road. 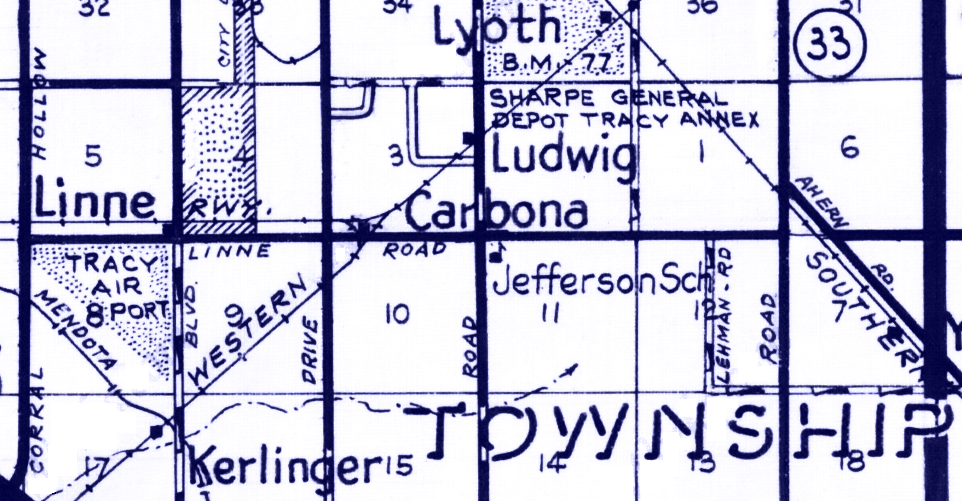 Carbona, as shown in this detail from a 1980 Metsker Map. (Click to enlarge)

The rails at Carbona date back to the late 1800s when a line was built out toward the foothills and Corral Hollow, where low-grade coal was mined way back when at Tesla; in fact, the depot was initially designated as South Tesla Junction.

The railroad was originally known as the Alameda & San Joaquin, and it was built specifically to carry coal from the mines back to Carbona (named for carbón, the Spanish word for coal) through Lyoth and Lathrop into Stockton.

According to the July 1901 Railroad Guide, Robert D. Fry was the Alameda & San Joaquin’s general manager, headquartered in San Francisco. At the time, the A&SJ operated 36 miles of standard-gauge tracks, interchanging with the Southern Pacific (at Stockton and Lyoth) and the Santa Fe (at Stacklair).

The A&SJ counted two locomotives and 100 freight cars – 80 flatcars and 20 coal hoppers – in its roster at that time.

The A&SJ – known euphemistically by railroaders back then as the “Andy & Sam Jackson” – only lasted a few years before it formed the foundation of the second iteration of the Western Pacific Railroad in July 1903, which expanded the line’s reach from the Bay Area through Nevada into Utah.

For many years, the Western Pacific had a depot at the Curve which, for most of its years, had “Carbona” on its rooftop sign. Although the Southern Pacific had many more trains rolling through its lines in and out of Tracy, the WP kept busy at Carbona, especially during the produce season, and it had several passenger trains that passed through here over the years, including the world-famous California Zephyr on its trek from Oakland to Chicago and back again. 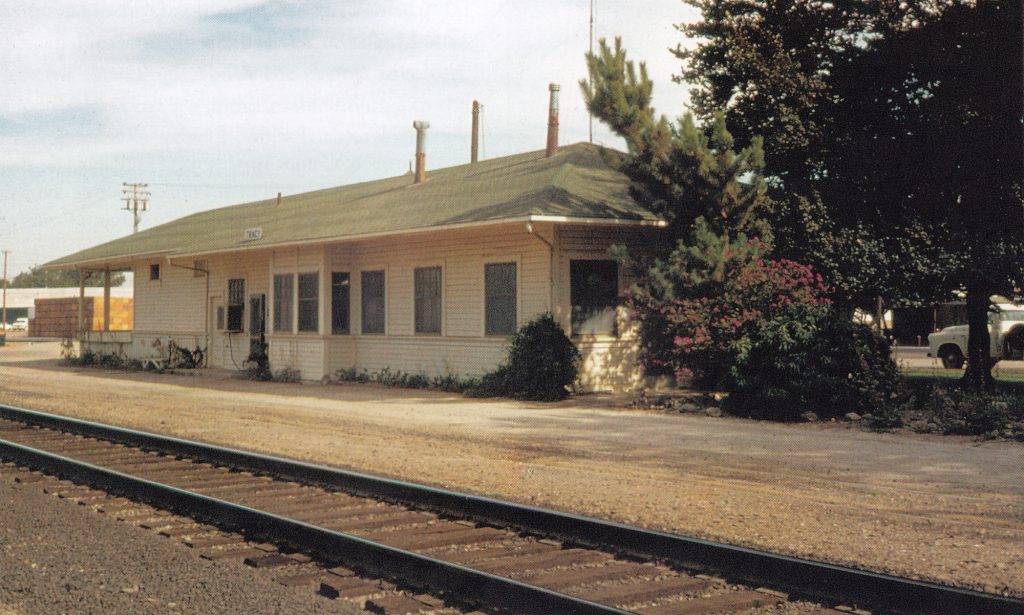 The Western Pacific’s Tracy depot, late in its life

According to “72-82: Western Pacific’s Final Decade,” the exceptional volume on the railroad’s waning years by Ted Benson, Dick Dorn, Dale Sanders and Dave Stanley, the WP’s Carbona station was actually the second depot building to be constructed at the site.

After a fire destroyed the first Carbona depot in 1933, the Western Pacific considered moving its local operations to the shuttered Nilegarden facility, then chose instead to move the original building a second time in 1934 to the Carbona site. It would serve there for another four decades. 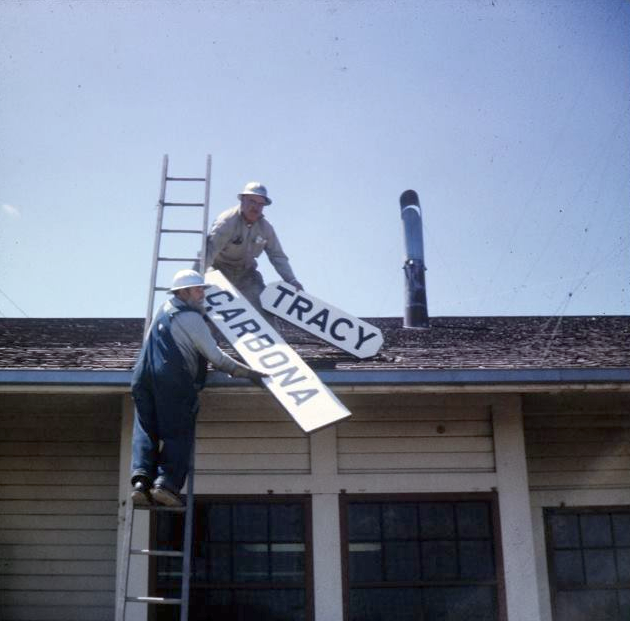 A sign of the times, May 1964: out with Carbona, in with Tracy.
(Courtesy of Bonnie Godwin Parker)

In May 1964, bowing to the inevitable tide of progress, the WP took down the “Carbona” sign from the roof of the depot and rebranded it as “Tracy.”

Subsequently, the old wooden depot was closed in 1975, with the building transferred to the railroad’s maintenance of way (MOW) department. It was demolished in February 1984.

The spot where it once stood is still visible — look for a patch of dirt near the brushy overgrowth of trees along the Curve.

A large water tower also stood for decades across Linne Road from the depot, used for filling the boilers of steam locomotives in need of liquid refreshment. Although it remained standing into the early 21st Century – five decades past the age of steam on the Western Pacific – it, too, was eventually razed.

Today, following the Union Pacific’s acquisition of the Western Pacific, several freight trains roll through Carbona in either direction each day.

Typically, several days a week, the UP switches cars on the spur to businesses in the industrial park behind the Tracy ACE station, as well as dropping off covered hoppers on the Curve itself. 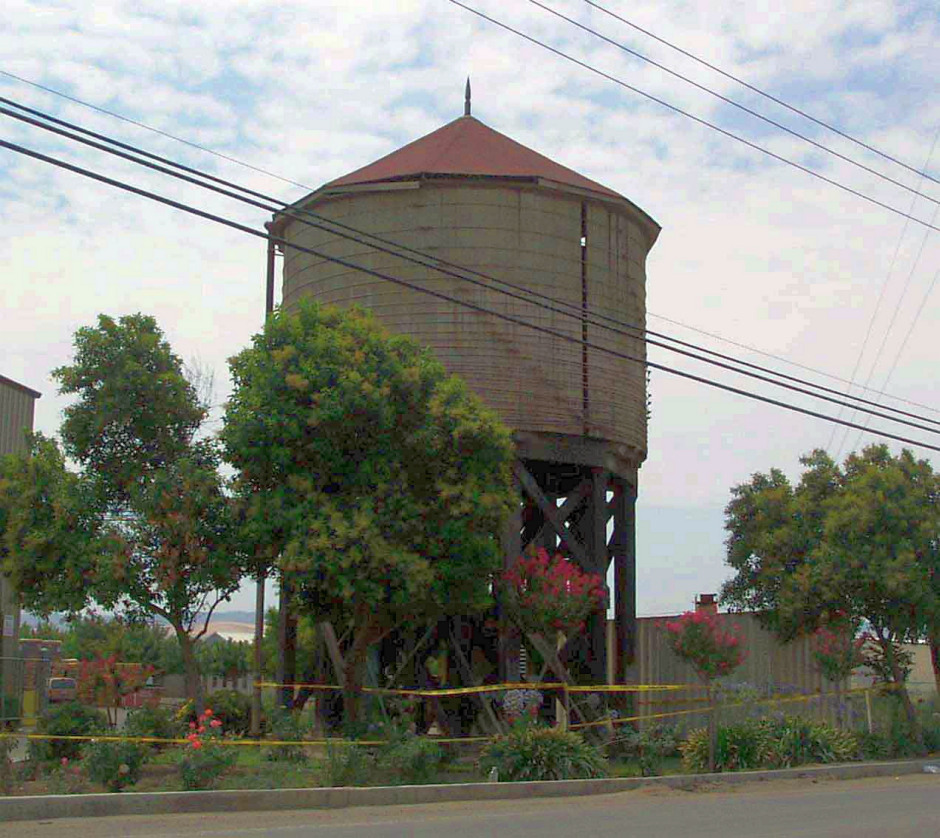 One of the earliest images of the Carbona Curve that we have located was included in the amazing John W. Barriger III National Railroad Library collection. A series of photographs in the Barriger collection, dating back to about 1914, encompasses a virtual black-and-white ride on the Western Pacific from Oakland, over the Altamont into Tracy, and then on to Stockton and beyond. 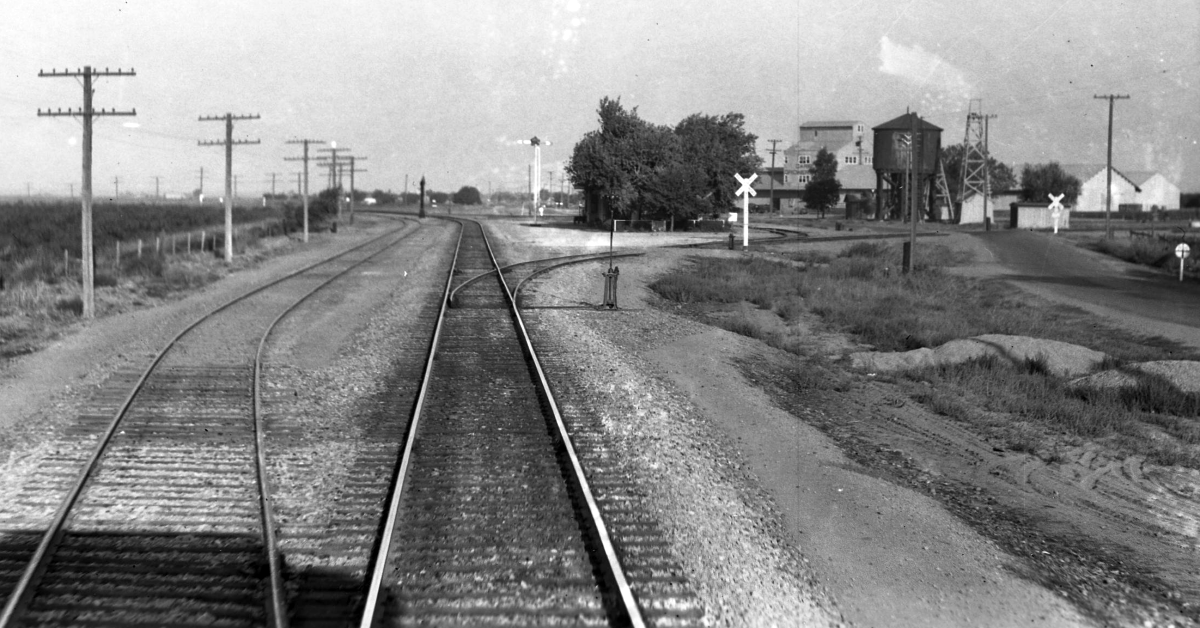 The Carbona Curve, circa 1914
(Barriger Collection)

In the photo above, with the train heading east on the Western Pacific mainline, you can spot Linne Road to the right, and the spur branching off toward the water tank, visible in the right distance; from there, the spur heads off to Corral Hollow and Tesla, following the path of the early Alameda & San Joaquin Railroad.

Just right of center, nearly hidden behind the cluster of trees, is the depot. Almost exactly in the center of the photo (appearing as a vertical white line) is a semaphore signal; to its left is a dark vertical post along the track’s curve – the water spout for steam locomotives, fed by the tank across the road.

Shown below is the same location, one-hundred years later:

Below, in the undated (late 1940s?) photo by the legendary Guy Dunscomb, a westbound WP freight train waits on the siding by the Carbona depot. The train is led by Western Pacific’s #322, a Class MK-60 2-8-2 built by the American Locomotive Company in 1924. As the WP quickly transitioned to diesel power in the late 1940s, #322 was retired from service in November 1949 and was scrapped in February 1950. 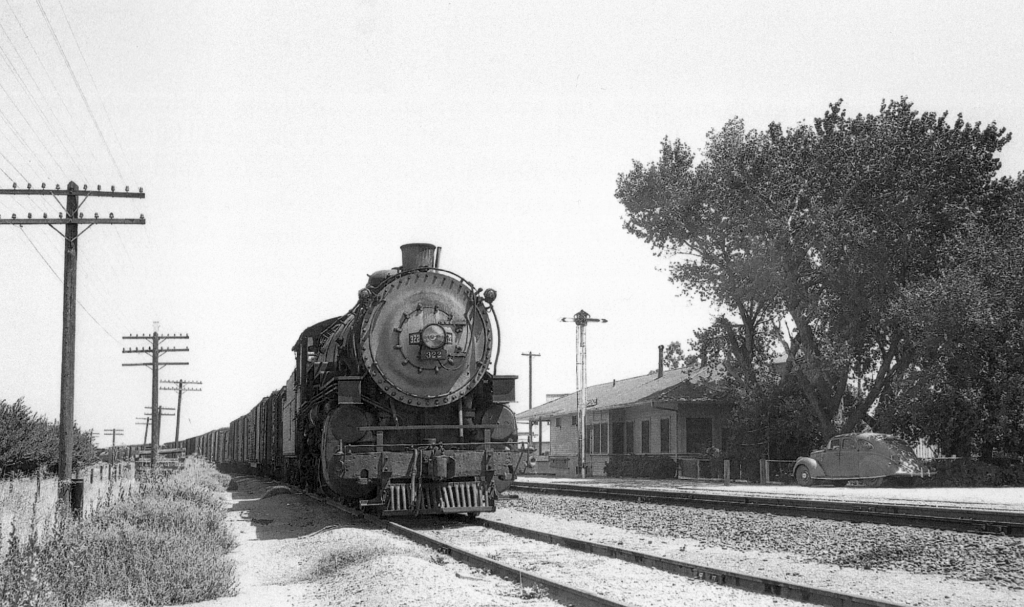 A Union Pacific crew switches freight cars on a damp and chilly December 21, 2018, at the Carbona Curve, with MacArthur Drive at left.
(David Jackson Photo) 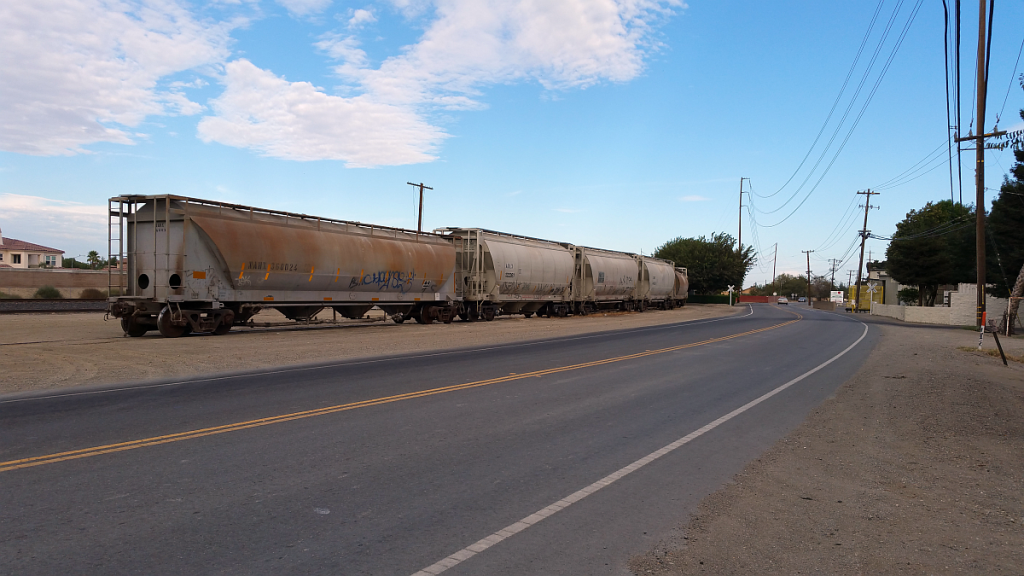 Above: Linne Road at the Carbona Curve, 2015

Above: Coil cars and covered hoppers at Carbona, December 2019 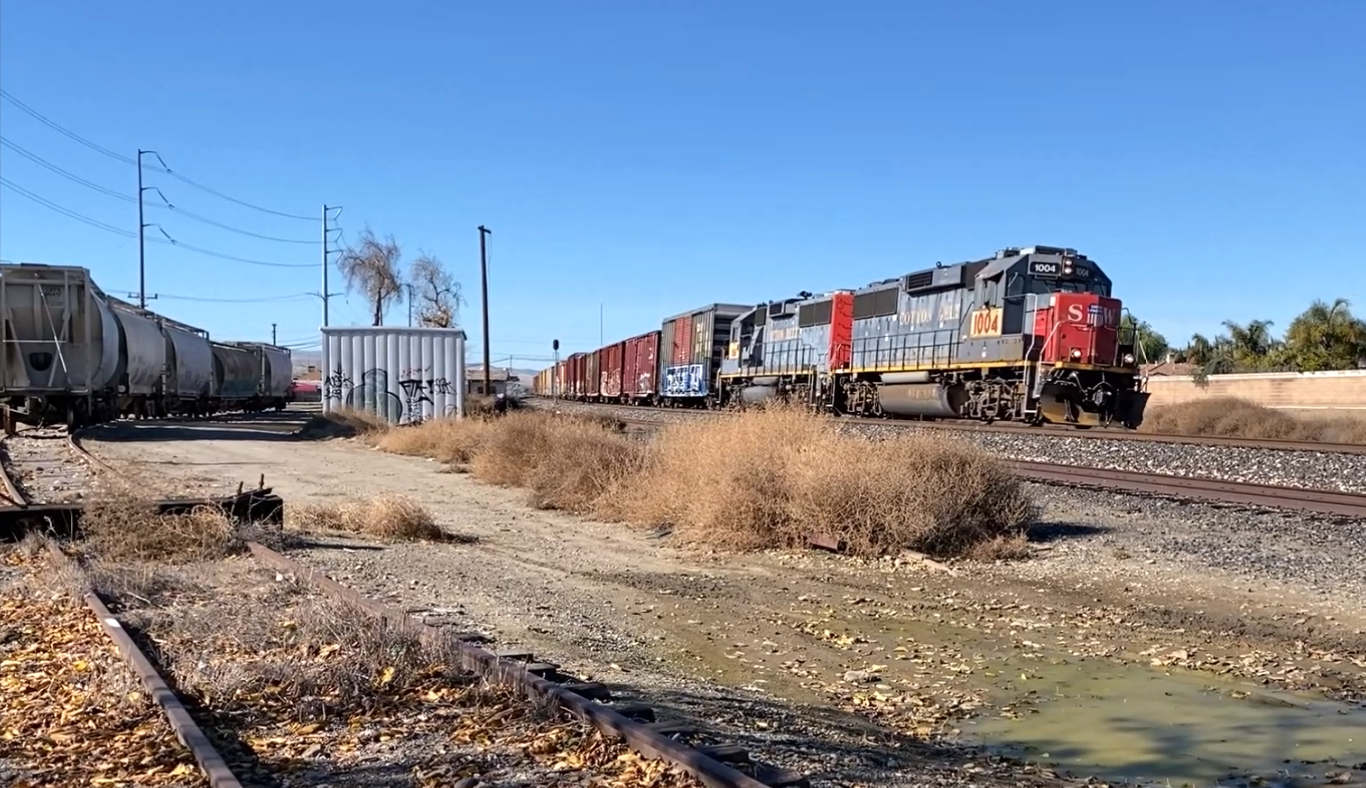 Led by a pair of patched ex-Cotton Belt road units, the Tracy Local – officially the LRS54 on the Union Pacific’s timetable – returns through Carbona after switching cars at Ayala – the spur behind the Tracy ACE station – just before noon on a brisk January Saturday early in 2021.

The featured photograph at the top of the page was taken by Ted Benson and was featured in “72-82: Western Pacific’s Final Decade,” which is required reading for fans and followers of the WP. (This slightly-crinkled copy of the photo was provided by Bonnie Godwin Parker, who spent many of her childhood years living in the Carbona depot, where her father, Jack Godwin, served as station agent from 1954 until 1974.)

Much of the information, as well as several of the photos shown here, is from Stephen M. Hayes’ “Western Pacific Depots and Stations,” which includes a photographic trip over the Altamont on the California Zephyr and extensive detail on the WP’s Carbona/Tracy depot (see pages 129-134).

The photograph of the wonderful old water tower at the Carbona Curve was included in an archived post on TrainOrders.com. The photographer (spdunsmuirkid) was not identified by name; we’d love to give proper credit, so please let us know if you know who captured the image.

Information on Western Pacific steam locomotive #322 was gleaned from the comprehensive all-time roster of the railroad’s motive power at WPLives.com, an amazing and invaluable resource for Western Pacific historical information.